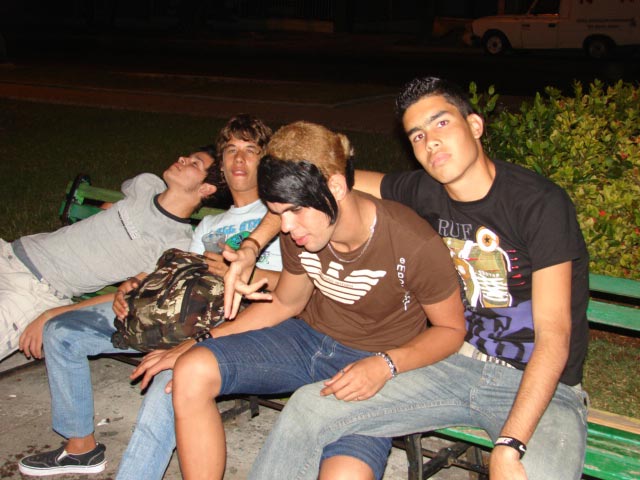 Saturday night and G Street in the most central part of of the city, is packed with young people sitting on the grass or pressed together in the darkest areas of the park. They boastfully show off every type of tendency, aesthetic, existential, musical and even sexual preference. They are part of the urban tribes that gradually invaded a Havana where a few years ago a man wearing an earring was immediately hauled off to the police station. Now, the impression is that Cubans want to make up for lost time, leaving behind those decades of military grayness where everyone dressed alike. The teenagers choose to emphasize individuality in contrast to spouting political slogans where the “we” is always emphasized, the formless mass of the group or pack.

Party night on the central avenue is just beginning. Quirky and sympathetic figures keep arriving. A group of supposed “werewolves” arrives in their dark clothes, and on the other corner several girls made up as vampires greet each other. From some nearby balconies older people watch and say something often repeated and dull, “These young people are lost.” They say it because their forms of dress seem grotesque to them, their tattoos aggressive, and the languor of some seems to come straight from Japanese manga.

But above all,the adults criticize the apathy of the young. They accuse them of living at the margin of reality, of floating on a cloud of apathy, of being able to spend the whole night talking about the latest Playstation game just released, or listing to music from Lady Gaga they’ve recorded on their cell phones. It would appear they live in another place, in a remote dimension, where material hardships and the prolonged crisis fails to interest them; in a cosmogony of their own that they have created to escape the here and now.

But, in evoking those days when I was the age of those who today spend the night on G Street, I realize that for us it was a time when we were too sober, too old. Those were the days of “volunteer” work on the weekends, endless military practice, and boring official television as the only distraction.

In contrast with the young people today, for us to go out in the street with hair a striking color or wearing jeans would have been interpreted as ideological deviation. And don’t even talk about access to imported comics! Every tendency to emphasize individuality was rejected, and dreams of fantasy stories like Dracula, The Lord of the Rings, or Momo, could be interpreted as psychiatric imbalance or a fascination with capitalism.

Differentiation was the shortest way to signal a possible disaffection to the system. Evasion could be taken as an opposition act, and the first hippies or rockers that dared to walk the streets dressed in their fashions, faced insults and official repression. The police vans raided these meeting places and the archetypal urban lumpen was personified on national television as someone with very tight pants, messy hair and sunglasses.

Uniformity was so abused for so long that new forms of dress began to appear, of living and loving, the rejection of the oldest was heard everywhere. Many of these older people cannot yet accept the existence of these emos, werewolves, transvestites, punk and guerks right in this society that tried to make itself over from a Marxist manuals written in the nineteenth century. For members of the Communist Party and the military has been especially difficult to accept coexistence with all these phenomena of modernity, with the boldness of the young and the explosion of their decorative accessories and body markings. But what arouses the greatest disgust is their tendency to be apolitical, oblivious to the vagaries of ideology, difficult to convene when their attendance is desired at some official event.

So when I see this lazy kids of today I feel relief and joy. I prefer the apathetic to the fanatic, earbuds connected to an MP3 player to heading off to trench warfare. It makes me happy to see them turn away from membership in the only youth organization permitted by law, or fail to applaud an octogenarian leader shouting at the rostrum. Seeing them, I know they will wake up from this inertia, and one day shake off the apathy they now display. It will be much easier for them than it was for us to put aside bigotry, to break the indoctrination.