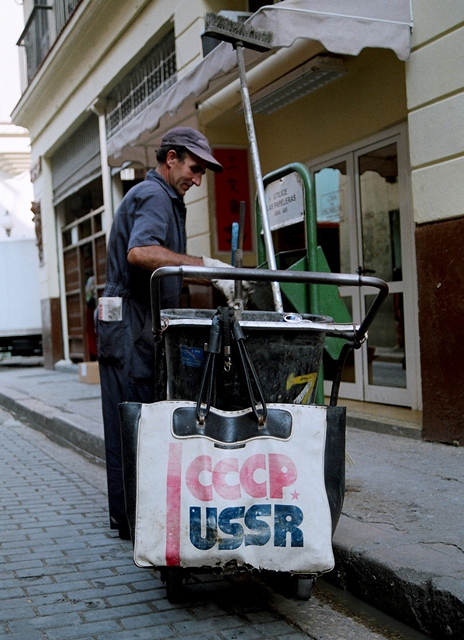 I understand that Western countries, where the government emerges from a multi-party democracy, must have their problems. Here the scriptwriters of any news report broadcast are very pleased when they comment on (because they almost never let you hear the voices of the international reporters) the news about the protests of the Outraged, Spanish students, or Americans.  They try to make Cuban television viewers see that these people are protesting to get something similar to what the Cuban Revolution represents.

I wish I could tell these people that you do well to struggle but don’t be mistaken in your paths. Because you don’t know what a government of the extreme left is. Historically the socialist parties of the left have tried to claim that they want to satisfy the demands of the “poor.” They have lifted up the discontented multitudes, the unsatisfied, and have manipulated them until they manage to establish a dictatorship of the State.

What these States and their Councils shelter are not beings more virtuous than those politicians with capital. They are worse, because capitalist politicians have to respect the Law, a Law that is above political parties.

Here they aired a documentary by Michael Moore — with the evil smiles of those panelists on the Roundtable TV show — where the U.S. filmmaker denounced the occasion on which, in his country, capitalism had conquered democracy. One can see well that Michael Moore hasn’t mutated in the cauldron of any totalitarianism, that fear has not paralyzed him.

In dictatorships of the left a very complex phenomenon is produced which effectively verifies a mutation of human nature. We no longer hear authentic protests because hereafter they are organized by the government. All real dialog between citizens and leaders is suspended, there is only a sea of human automatons, hungry, unhappy, but incapable of protest.

Instead of protesting people turn to theft, fraud, prostitution, doing harm to those closest to them (I have a friend I enjoy who, in 1995, received a hammer blow to the head before his bike was snatched). But in every neighborhood there will be a “CDR” — a Committee for the Defense of the Revolution — which is no longer a real community but simply a form of vigilant coexistence, with political priority, among the same mutants who at times give the impression of… even of harmony.

Because, here also, the immense concentration camp is guarded by the prisoners themselves. It’s a mixture of confusion, fear, submission, simulation and, ultimately, there are also people who get satisfaction from being agents of power, who have to clip the wings of conscience of the whole world, and who, bribed with very little, will spread fear.

Almost always in this model of government a leader appears — my courage does not stretch to citing anyone in particular, it’s too terrible, but I can cite the now inoffensive metaphors of Lenin, Stalin — and the people, dispossessed, forgotten, without access to education or medical care, celebrate a betrothal, a wedding and a honeymoon with that leader.

The first heads that rise are cut off, with impassioned cries and thus, the complicity of the masses. There are not a few heads, they don’t have to be only oligarchs or landlords or capitalists, they can be humble people who in their time supported the Revolution and so they themselves would see up close what was afoot.

Little by little, in exchange for literacy campaigns, urban reforms, expropriations of business owners, and many many subsidies, the people will let the leader consolidate the tyranny of his whims and desires; because it will irresponsibly be confirmed that this leader had been believed in his leftist ego: that only one man could always see the light to know what is good for millions.

That caudillo’s pride not only expropriates others’ wealth, it also robs them of the responsibility with which freedom is achieved. (All this can be proven in each and every one of the totalitarian states, because fortunately social phenomena show the laws of dynamics of strength within them.)

The biggest beneficiary in this social marriage is charged with abolishing the law that would revoke it. In that goodwill of responsibility there is one who emerges with the responsibility for everyone, but he no longer has to answer to anyone because without freedom we cease to exist as persons, so it is even logical that a leader doesn’t see us.

So each day freedom of expression will become more dangerous because we would begin to exist, but he will make people believe that the oligarchs are in collusion with foreign powers and that this is what makes uniformity of thought necessary. That is, he denies that this same people is the author of rebellion, its brain is must be following another.

There will be a campaign, as repetitive as the ideology, that says the dissidents and opponents don’t represent themselves when they protest against the absolute power that oppresses, abuses, impoverishes, denies; and that, they see it well: it would seem that the lack of rights is legitimate for people forced to rebel against tyranny, but as they have demonized any rebellion that is not theirs, the tyrants crush peaceful opponents who only protest with their voices, with their opinions, with their signs, after accusing them before “the people” (who again license the tyranny to do what it wants), of being “mercenaries.”

Here I have to take a break because I must clarify that I also believe that civil and peaceful resistance is the best way not to fall into a Revolution.

But I remember, in the Universal Declaration of Human Rights in the preamble, the first and third points: “Whereas recognition of the inherent dignity and of the equal and inalienable rights of all members of the human family is the foundation of freedom, justice and peace in the world”; “Whereas it is essential, if man is not to be compelled to have recourse, as a last resort, to rebellion against tyranny and oppression, that human rights should be protected by the rule of law”…

This might have been, and it was not about rebellion, but about rights under the law, the defense of the 75 arrested in the 2003 Black Spring. But the defenders of socialist Law, the prosecutors and commissioners of “the people,” consider that this artificial paradise of totalitarian positivism that ends up being total negativism, is the maximum that can be achieved and that the “New Man” has renounced the Declaration of Human Rights in those 30 articles. Here we see that those in their Interior Ministry uniforms even seem human and “decent.”

My God, my God, why hast thou forsaken me? The political prisoners and the closed political prisons will appear. Perhaps they will not be tortured a la Batista or Pinochet; they will be tortured a la Stalin with scientific methods, that do not always kill but that annihilate human beings with the intention of making them feel they are dogs without rights and to doubt their reasons for being opponents of the dictatorship of “the workers.”

They will be handed over to the gendarmes, who come from such humble people, turned into fanatics by the leader and having cultivated a deep hatred for the dissidence, and to them they will leave the dirty work of torture in multiple ways every day, because the authors of the nightmare will never again show their faces and the humble people will begin to say, “the caudillo knew nothing of this, if the caudillo knew…”

It is a complex phenomenon, which fortunately has been studied, often by those who suffered it. And it definitely sows terror in the minds of everyone, so we are immobilized and cease to exist. No one knows until we show up, tripling the responsibility and waiting on God for the end of these times.

This is not what we have done, like Guernica; they have done it. And like verse 23 of chapter 18 of the Gospel of John: If I have spoken evil, bear witness of the evil: but if well, why dost thou smite me?

I would like one of the Outraged to read me so I can tell him that I respect any protest because I know what it means to have no power, even to protest. But never be fooled by any leader nor by any Communist. We must seek happiness but the price can never be freedom.