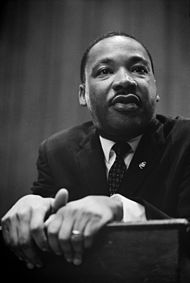 The third Monday in January of each year in the U.S. honors the memory of the Rev. Martin Luther King Jr. (1929-1968). From Cuba I follow the example of this Baptist pastor like me. To those oppressors who constantly threaten and harass me based on the taboo that Christians should not get involved in politics today, I offer as an example the life, work and preaching of this man of God who, in the light of the gospel of Jesus which frees all the oppressed and exhausted, gave up his own life.

Hopefully, in the Kingdom of Heaven I can embrace King  and say, “Brother, thank you for challenging me with your example, in Cuba I tried to do as you did in your country. Like you tried to follow the footsteps of the crucified. Amen”