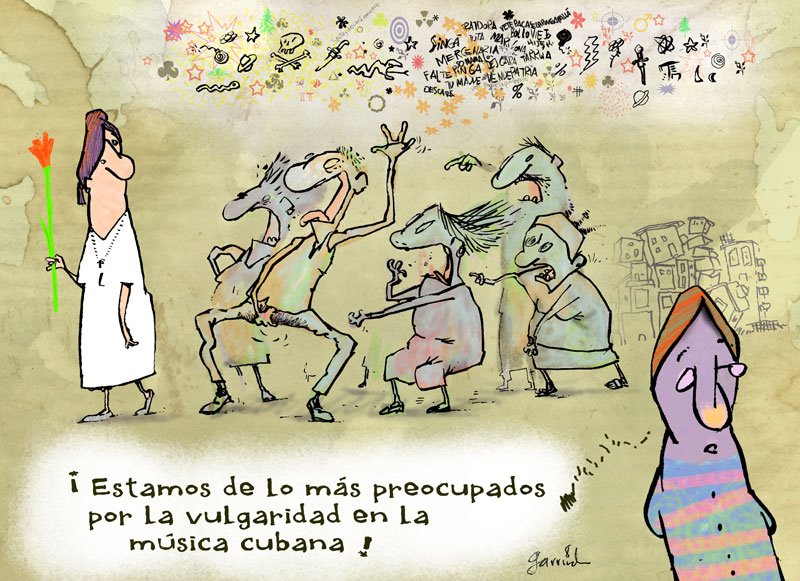 What we are most worried about is the vulgarity of Cuban music. Caricature of Garrincha taken from the Internet

By email, this second and efficient manner that we Cubans have a receiving information, I have received a brief text that is attributed to various authors, but that jumps into the ring anonymously.

The triumph of the mediocre is the title and it refers to the situation in Spain. Removing some paragraph or some local reference it fits us perfectly. I will be returning to an old critique, but I don’t get too excited by what I see all around me. The bad taste and the vulgarity are not only in the lyrics of danceable music: the patterns of dress, the design (or the absence of it) that proliferates in the environment, social behavior, the deterioration of services, the bad functioning of education and health, the one time workhorses of the battle, the grayness of politics and politicians; the list where everyone who fills it, has something to do with the fact that mediocrity wins.

I don’t have the cure. There are no magic potions. But in our case, the enclosure in which we live and the exodus that has divided us must be taken into account. A Pyrrhic victory.

The Triumph of the Mediocre

Perhaps the time has come to accept that our crisis goes beyond the economy, beyond this or that politician, the greed of the bankers or the risk premium. To assume that our problems will not be changed by one party or another, by another battery of emergency measures, or a general strike. To recognize that the principal problem of Spain is not Greece, the euro, nor Mrs. Merkel. To admit, to try to correct, that we have become a mediocre country.

No country comes to such a condition overnight. Nor in three or four years. It is the result of the chain that starts in school and ends at the establishment. We have created a culture in which the mediocre are the most popular students in high school, the first to be elected to office, those who have the most to say in the media and the ones we vote for in elections without caring what they do. Because they are us. We are so accustomed to our mediocrity that we have ended up accepting it is a natural state of things. Its exceptions, almost always reduced to sports, serve us to deny the evidence.

Mediocre is a country with a quarter of its population unemployed yet it finds the greatest motives for outrage when the puppets of a neighboring country make jokes about its athletes. Mediocre is a country where the brilliance of another provokes suspicion, creativity is marginalized — if not stolen with impunity — and independence is punished. The country that has made mediocrity the great national aspiration, pursued without complexes by its thousands of young people who look to occupy the next place in the Big Brother contest, by politicians who insult without coming up with an idea, by bosses who surround themselves with the mediocre to hide their own mediocrity and by students who ridicule a classmate for his hard work.

Mediocre is a country that has fostered the celebration of the triumph of the mediocre, cornered excellence until it is left with only two options: to leave the country or to allow oneself to be swallowed up in the gray sea of mediocrity.