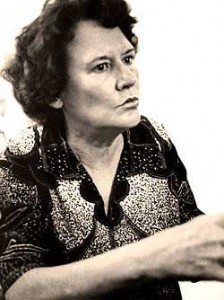 HAVANA, Cuba, August, www.cubanet.org -The suicide of Haydee Santamaria Cuadrado continues to be a problem for Fidel Castro.  The tragic event, which happened July 26, 1980, doesn’t appear in the 2007 chronology edited by the government. The official media almost never reviews the tragic incident.

The so-called “Heroine of Moncada” not only choose this very significant date to shoot herself in the mouth with a 45 caliber bullet, but it also coincides with certain events that had occurred days before, which perhaps could have been influential.

From April 6-9, her Revolution suffered a blow which had no precedent in history: more than 10,000 people penetrated the Peruvian embassy of Havana with the aim of fleeing Cuba, and only a few days later, another 125,000 left the port of Mariel, in boats heading to Florida, during a continuous 5-month exodus.

Did Haydee know that Fidel Castro himself gave the order to carry out “acts of repudiation” against those immigrants, that he offended their dignity by calling them scum, or that two boats, the Olo Yumi and the Veinte Aniversario, were rammed and fired-upon by military forces, to the North of Mariel and Canimar River, where 50 men, women, and children were killed trying to reach the shores of the United States?

I knew Haydee in the sixties. I heard her talking many times, she facilitated meetings with Cuban intellectuals and foreigners. She was a tremendously unassuming and humble woman, with only a 6th grade education in a small rural school.

Far from being a truly bossy type, such as Margaret Thatcher, it was evident that it didn’t matter much to her to have climbed the steep heights of Cuban politics: she was a member of the Central Committee of the Cuban Communist Party and Advisory Council of the State, as director of Casa de las Americas.

In no way was her manner that of an important woman.  She dressed like any other small town woman and assumed without vanity the title “Great Heroine of the Revolution” which was awarded her for having transported a couple of suitcases with firearms to Santiago de Cuba and for having completed six months of jail in 1953.  Also for contributing to the assault on the Moncada Barracks.

Someone told me that at times she cried in her office, when her son, Abel Enrique, confessed that he had hated Fidel Castro from he was young, because when she had promised to take him for an outing she had to cancel because of a meeting with Fidel.

This past July 28, sixty years since that bloody traitorous terrorist act, carried out in the early hours of the morning while the soldiers slept, Fidel Castro himself confessed that it wasn’t a rational act, “….given the low accumulated experience it would have been much more realistic and secure to start that battle in the mountains.”

Perhaps Haydee had noticed that the attack on Moncada was a crazy idea on the part of Fidel, for whose cause she had lost her boyfriend* and Abel*, the brother she loved most dearly?

Maybe the day of her death she felt remorse to think of the young soldiers in the army who, friendly and gentleman-like, helped her step down from the train with her heavy suitcases full of firearms, who perhaps were also killed by her friends dressed as soldiers?

*Translator’s note: They both died at Moncada, reportedly tortured to death in the immediate aftermath of the attack.

Tania Díaz, Villa Clara, 1939. Founder of the National Writers and Artists Union of Cuba. Poet. She has published five books. Worked as a reporter for 23 years on several magazines in the country. Spent a year and a half in prison in the mid-eighties for her activities in the Human Rights Party. Since 1998, writes for CubaNet.