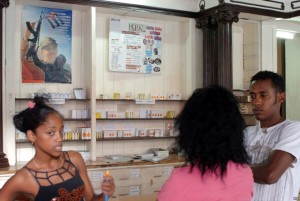 HAVANA, Cuba, August www.cubanet.org. A good part of the staff in the network of Havana pharmacies, in collusion with doctors in medical offices, clinics and hospitals, sell the medications from these establishments at a premium price, as if they were private businesses.

The lines in doctors’ offices, hospitals or hospital outpatient services, coupled with the lack of doctors, who are serving on “missions” in other countries*, contribute to turning any kind of pain into a difficult problem. To get a prescription for a painkiller can be half a day’s work.

To resolve this problem, many staff at the pharmacies offer an alternative but illegal service: They sell drugs without proper prescriptions. Thus, patients avoid having to go through the doctor’s office. All they have to do is buy the medicine at a higher price.

Jose Manuel, self-employed in the municipality of October 10, woke up a few days  ago with pain in the neck. Neither he nor his neighbor had any painkillers. He went to the family doctor’s office, but the doctor was “on a mission” in Venezuela. The nurse told him the new doctor hadn’t come to work. At another doctor’s office they told him they only saw pregnant women. Then he went to the pharmacy to try to negotiate for some painkillers. The clerk said that without a prescription he couldn’t supply them; however, as he knew he was a regular customer, he said he had a solution for him.

The solution for José Manuel was to pay four times the price of the drug. The blister-pack of 10 tablets of pain medication that would cost 0.70 cents in local currency with a prescription, could be had now without prescription for 5 pesos. 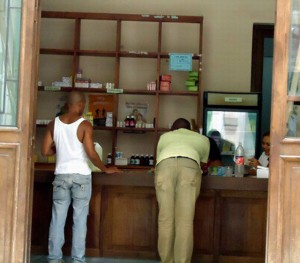 According to a source who works in a Havana pharmacy (who declined to be identified), she can earn more than 150 pesos, national currency, in one day**, selling drugs without prescriptions. “The thing is not so complicated. We have doctors who supply our prescriptions. They charge us 1 Cuban currency for each prescription. That way we can sell ’under the table’ all the medicine we want, because they are backed by a medical prescription.”

She further claims that most of the clerks take the prescriptions home for family and friends to fill them out. Thus, they avoid that these documents show the handwriting of the pharmacy workers. They also try to find different doctors who sell prescriptions, so as not to repeat too much the stamp of the same doctor. Although among the doctors who engage in this activity they exchange prescription pads, so that their identity does not appear too often in the same pharmacy.

The source added that to avoid getting caught, each clerk serves a known clientele. The rest of the medicine they take home and give them to third parties to sell. A pack of 150 grams of cotton can cost $2 on the black market. A tube of Micocilén powder, $1. Creams and ointments, 10 pesos a tube. The Meprobamate blister-pack with ten pills, 10 pesos.

Dr. Silvia recognizes that there are patients who need medications, and find it difficult to access a prescription, for one reason or another, but she considers that the majority of consumers who access medicine in this way are those who self medicate: “There people who need to have a kit with the full range of potential drugs, and not just because they think they will be unavailable, but because today they take Duralgina for one pain, and tomorrow Ibuprofen or Paracetamol because they believe that Duralgina no longer has any effect. Some people take Meprobamate, then say they can not sleep, and there are an endless number of examples like this.”

But whatever the reasons that patients take the medications, the fact is that this market in Cuba is profitable for the white coats.

Translator’s notes
*Doctors on missions: A main source of income to the Cuban State is the money charged for doctors and other medical personnel who are sent abroad “on missions.” The State collects many times what it pays each doctor.
**150 Cuban pesos is roughly $6.25 US, which is more than a week’s average salary in Cuba.

Julio César Álvarez López (b. 1968) Graduated in 1990 from the Hermanos Martinez Tamayo School of Counterintelligence. Arrested in 1992 for collaborating with Human Rights Groups and sentenced by a military court to 19 years, of which he served 16, seven of them in the Maximum Severity Prison of Camaguey. He was paroled in April 2008 and studied computing and digital photography at St. John Bosco church. He speaks English and is currently studying German. He lives in Havana.