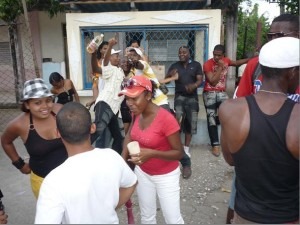 [Translator’s note: A longer version of this article, which appeared on Cubanet, was subsequently posted on Miriam’s own blog and is translated here.]

The surprising disclosure in the official media of something that has quietly taken place in the past (ethanol poisoning), could be due to several interrelated factors: suitability to meet the Government’s angle to provide informative coverage about the “fight against corruption”, interest in offering an image of a government sensitive to what happens in society, showing the purported effectiveness of health institutions and of the internal agenda in facing such adversities and taking advantage of the events making a point as a moral lesson, among other motives that I’m sure escape me.

Of course, news like this will always be disclosed in the press, in addition to second or third intentions relating to policy junctures and strategies of the government, only that it would be much more effective to delve into the essence of the matter and not only in its external and immediate effect, because what is at stake here is not simply a case of unscrupulous people who peddle toxic substances for the consumption of certain groups of individuals from disadvantaged sectors of society, but from the combination of many evils of the Cuban reality, expressed in a situation in which authorities and official media are also jointly responsible.

The event that took place in a Havana neighborhood places us at the tip of the iceberg of the widespread crisis of an economic downturn, the failure of our utopia, hopelessness, loss of values and the absence of perspective. The overall decaying of the system is authenticated in all areas and levels of national life, and it far exceeds the government’s ability to address the crisis. It is the metastasis of the terminally ill “model”, unable to cure the nation’s moral damage.

This time, there was the combination of rampant corruption, widespread alcohol addiction and low purchasing power of the poorest sectors of the population, all factors that contribute to the trafficking of various toxic substances, as well as other commodities, just as bad or even more macabre, such as the well-known case a few months ago of trafficking in human fat tissue stolen from corpses at the Guanabacoa Crematorium, marketed as edible fat in the illegal market, or of the sale of the meat of stolen lab animals, carriers of various diseases. Only Cuba’s deteriorated conditions, or in societies as distorted as ours could similar events take place.

The illegal trade of alcohol is widespread in the Island’s capital. Almost all neighborhoods have one or several of these dealers, from both clandestine stills and from theft of the legal networks of stores and warehouses. Cuban wit has dubbed these concoctions with different names which, in the way of the marginal language, translate into the effects of their ingestion: mofuco, tiger’s laughter, man and earth, train’s spark and the like. Though Trafficking and consumption have always existed, they have proliferated since the 1990s’ crisis, when even the ration card, unable to keep up the hefty subsidies of the previous years, guaranteed a monthly quota of rum for each family nucleus.

Alcohol affects memory
That’s why few Cubans remember the weekly meetings of the leaders of the Communist Party and the Popular Power, televised every Tuesday, which the people dubbed “Meeting of the Fatsos” because of the participants’ glowing looks, in contrast to those of the hungry and emaciated population. In one of the reunions the then First Secretary of the Provincial Committee of the Cuban Communist Party, Jorge Lezcano, cynically stated that what the population could not lack was rum. Alcohol consumption was, therefore, an official policy aimed at dulling people’s thinking: alcohol to forget our frustrations in the midst of the worst shortages in the last century of Cuban history.

Social expectations have not improved with the passing of the years, and alcohol consumption has increased at the same time as the average age for its consumption has  significantly decreased.  In a country where there are more frustrations than expectations, it is not surprising that alcoholism has reached truly alarming levels

For now, the case of La Lisa drunks is already out of the media, and it will soon be forgotten among ethyl vapors and other essentials. We don’t know if the cuckolds and abused ones du jour will be the surviving victims and, as such, will be charged with the crime of receiving. It may be that workers who stole methyl alcohol from a warehouse owned by the State and those responsible for the management and administration thereof will be the scapegoats more severely punished this time.  Responsibility will be refined only to a reasonable level.  At any rate, everyone will again drink whatever they can and the saga of unlawfulness will continue its unstoppable march, while the chief culprits of such disastrous events will go on, unpunished.