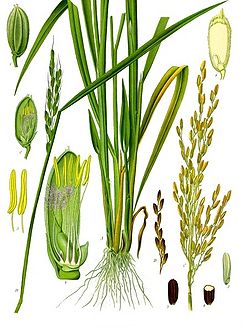 Count on earthworm remains, bits of assorted garbage, tiny jaw-breaking pebbles, and the odd piece of moon rock mixed inside the minute ration of the people’s rice being offered by the State; this is the quota for December which was released for sale November 30 in the bodegas (ration stores) in Vibora and everywhere else.  Go figure why the government chose December — a time when many families celebrate various Christmas or New Years gatherings and meals — to get rid of a large portion of dirty and off-color rice more fit for bird than human consumption.  All that the store manager at my “designated” bodega could say was that the grain crop available was from Pinar del Río (West of Havana) and was the only rice supply being distributed to consumers in the Tenth of October (Diez de Octubre) municipality of Havana.

I went to another local bodega and got the same song and dance.  My gripe upset a neighbor to the degree that I got scolded for taking a stance.  I was soon reminded how some brownie point seeking official would be chomping at the bit for the opportunity to nag us for hours on end — and pep-rally style — about the great job the State does for the people by providing free rice.  Beyond that, we would also get some impromptu group shouting slogans thanking the Department of the Interior for poultry, pig or any other State farm for giving us such piss poor quality products.  Fine.  But nearly inedible State products are unnerving: Cuban family members trying to put decent food staples on the table are forced to endure unbelievably time-consuming and exhausting hardships just to make a meal edible.

Most exasperating of all: Why can’t rice ever be “deregulated” so restrictions can be lifted and we can buy whatever we would like or can afford to pay?  Instead, like helpless slaughterhouse pigs, we always get the same condescending mantra: “Eat the stuff or eat the stuff.”  For consumers, the outrage ultimately becomes subsumed in listless apathy — or oddly enough — a pact of collective silence when the State decides to run roughshod over our rights.  Almost imperceptibly, people do murmur. Many are alarmed the local rice crop might suffer the same fate as our potato production when a substantial Cuban government subsidy to Bolivia all but eliminated potatoes from our sight for most of 2013.

An elderly neighbor tried to console me by saying, “Listen: If you cook it, it’ll taste O.K.”  But honestly, after wasting three whole hours sifting and washing rice to clean the grain, I could care less about the flavor, the quality, or whatever the rice’s appellation of origin might be.