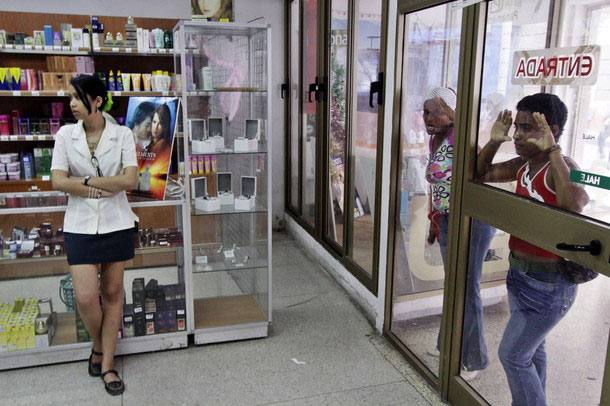 The “blockade,” as the Cuban government calls it, is real. It’s a trade embargo by the United States declared in 1960 and implemented rigorously since 1962. It caused the machinery from American to become scrap metal.

Later, the damages were minor. The former Soviet Union connected a pipeline and oil and rubles flowed from Moscow to Havana. The cold Eurasian country supplied the tropics everything from trucks and tractors up anti-aircraft missiles and MIG-29 aircraft.

All this was paid for by sugar cane, candy and marble. Or, without paying a penny, in the case of weapons. Knowing that the northern neighbor had imposed on us a “criminal blockade,” in the words of Fidel Castro, the logical thing would have been to try to streamline the flow of money and resources that came from the Kremlin by decree and to try to design a profitable industry and an efficient infrastructure. But that went.

In the period from 1975 to 1989, when the island survived on resources from Eastern Europe, the effects of the embargo were hardly noticeable. Then the Berlin Wall fell. And Cuba had not invested in development. We knew only how to spend and spend.

Then in 1990 came the inevitable economic crisis. The euphemistically named “Special Period.” A war without deaths by bullets, but with the same consequences. Hunger, blackouts of 12 hours a day and an economy returning to the primitive.

That was when Castro started speaking again about condemning the embargo. The entire world bears witness to the injustice, in its annual votes in the United Nations. But if Cuba had efficient agriculture and industry and coffers filled with money, the U.S. embargo would have been a useless tool.

But blaming all the ills of the Cuban economy on the embargo is not fair. We are lethally ineffective because a structural problem in the system. The “blockade” is also a sieve. Stores in Havana are selling products Made in USA, such as Coca Cola, Del Monte juice and Dell computers in foreign currency.

Since 1959, America has been and still is, the number one enemy of Fidel Castro. That has not stopped the country from selling more food to the island in recent years.

The real embargo, but three times more violent, is the one the regime has implemented against its own citizens.

No free-flowing information; the Internet is a luxury to be paid for in foreign exchange; to leave and return to your own country you must wait patiently for the government’s permission; and you can end up behind bars if write your opinions or start a political party.

Not to mention the obstacles placed on the flow of parcels from the outside. Following the three hurricanes that hit the island in 2008, it was permitted to send up to 11 pounds of medicines and other items. The first thing the Cuban Post Office did was to raise the import fee from 20 to 70 pesos, half of the pension for many retirees.

They take advantage of an unfair measure, such as the embargo, to put their citizens’ necks in the wringer. People are tired of the embargo, but also of their ancient government.