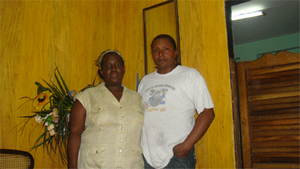 According to reports from neighbors and dissidents, the opponents and activists for racial equality, Sonia Garro Alfonso and Ramón Alejandro Muñoz González, on the evening of Wednesday 21 March, specialized forces of state security and special troops used rubber bullets to make an arrest at their home, located on Avenida 47 No. 11638 between 116 and 118, Marianao, west of Havana.

One of the rubber bullets hit the foot of Sonia Garro, who almost dragged from the upper part of her home. Sonia’s health is very delicate, she was waiting to be admitted to receive treatment for a kidney problem that is exacerbated by the blows that police have given her in the lower back.

The violence of the lightning operation can only be explained by the fear that the political police have for this marriage, who from 2011 have lived under perennial siege and repression. The harassment of them has been so brutal, that in May last year faced with a new arrest of his wife, Ramon, a tall and corpulent man, climbed to the roof of his half-built house and machete in hand and decided to ask for freedom and condemn the Castro brothers’ regime, protests that someone recorded it and posted on You Tube.

This arrest is part of a major operation designed by the Department of State Security Department on the occasion of the Pope’s visit to the island to keep behind bars those considered to be the more militant opponents, including especially the Ladies in White and the women of the Rosa Parks Feminist Movement.

For days, a kind of ’cleansing operation’ was held in Havana by the police and public health authorities to remove from view the hundreds of beggars, fools, drunks, street vendors and those who search for food in garbage bins, among other marginal types who swarm the streets of the capital.