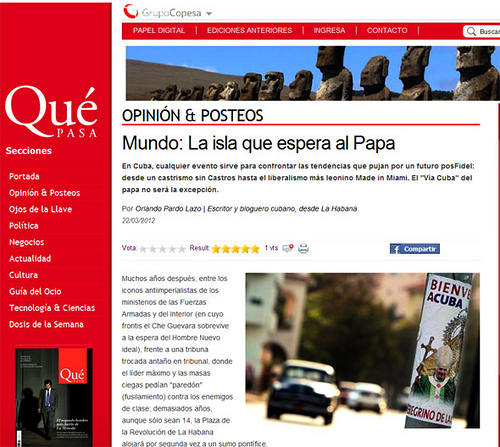 World: The Island That Waits for the Pope

Many years later, between the anti-imperialist icons of the ministries of the Armed Forces and the Interior (on whose facade Che Guevara survives the great hopes of the ideal New Man), facing to a platform once converted into a tribunal, where the Maximum Leader and the blind masses demanded “to the wall” (execution) against the class enemies; too many years later, even if it is only 14, the Plaza of the Revolution in Havana will host supreme pontiff for a second time.

During the past month, emergency brigades have erected in Santiago de Cuba and the capital, the ephemeral altars where Benedict XVI will officiate Masses on Monday and Wednesday.

They have covered with make-up — even relocating families — the facades and avenues where the pope will travel at the invitation of the government and the Conference of Catholic Bishops, in the Jubilee Year for the 400th anniversary of discovery of the Virgin of Charity, patroness of Cuba, which for 16 months recently made a pilgrimage of almost twenty thousand miles through the whole island.

Of most concern today is the record wave of arrests without warrants, plus the supposedly spontaneous “acts of repudiation” against the classical opposition and the emerging civil society. In response, there were a peaceful occupation of churches in Pinar del Rio, Holguin, and the capital, with the controversial cooperation between the Catholic hierarchy and the political police during the evictions. An alliance sealed when the Communist Party newspaper gave its pages to the editor of the magazine Palabra Nueva of the Archdiocese of Havana (in practice, the spokesman of Cuban Cardinal Jaime Ortega), whose speech was a carbon copy of the official stigmatizing style.

As the parliamentary body of the island — the National Assembly of Popular Power — for decades has unanimously ratified every law, and given the lack of independent institutions for the debate between reform versus stagnation, in Cuba any event serves to confront the possibilities being pushed for a post-Fidel future: from a Castro-ism without Castros of the military court (the elderly group of generals still controls the economy) to the more liberal leonine Made in Miami (the empowered exile is a fifth of the population of the island). And, even if he doesn’t awake the sympathies that his predecessor did in January 1998, the Vía Cuba of Joseph Ratzinger Via Cuba will be no exception.

Thus, columnists lacking in imagination have suddenly been resuscitated with a plural arc that ranges from enthusiasm to skepticism, from democracy to delirium. They are dusting off the republican pillars of the nation. They are evoking fundamental analogies between Christians and Communists are evoked. They are sneering at the periods of religious apartheid under a dogma that wants to be science and even has a constitutional range. And they are recycling rumors that non-uniformed police will exceed the faithful in numbers, or that the State company Cubacel is going to block mobile phone transmissions during the gatherings, for fear that a tropical Tahrir Square will erupt before the correspondents of the world.

A convoy of pilgrims will come from the U.S., in a goodwill gesture from Havana, but there is already censorship for reasons of “national security” or “political despotism,” according to the version of each side. As a “relief” or “provocation,” an alternative flotilla will come from Florida to the limit of territorial waters on Tuesday night the 27th, to fire off, as on previous patriotic dates, a display of fireworks visible from the capital.

What the charismatic John Paul II failed to accomplish at the end of the last century — the right to a Catholic education for starters — it is unlikely that Benedict XVI will try on a shorter visit. Despite internal petitions (and also an open letter from former Polish president Lech Walesa), the Holy See looks imperturbable: they plan no meetings with dissident sectors, not even with the human rights activists the Ladies in White, through whose street demonstrations dozens of political prisoners were able to go into exile in 2010.

The Cuban nation should not turn its back on itself. The risk of social collapse is not negligible, from the anthropological damage of the crisis of values, and from the continental situation where the subsidies from Hugo Chavez could be dangerous to its health, condemning the island to a worse mess than that caused by the collapse of Soviet socialism. It is irresponsible for the historic leaders not to believe in the spiritual and material conditions for a gradual process of reconciliation. And even though the Catholic Church insists on its pastoral rather than the political nature of its guest, the permanent postponement of the first stone of the transition is left in the infallible hands of the Pope.