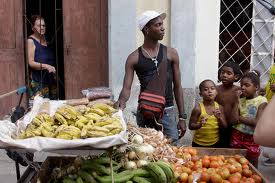 Every day that goes by Cuban citizens feel the mistakes of a government that doesn’t know how to run a country nor how to rescue it from underdevelopment.

The government-prepared Guidelines discussed previously do not solve anything, they only reflect the desperation to seek uncertain horizons while waiting for a fluke to achieve a positive outcome for the country.

On many occasions the government has demonstrated its incompetence and for those who still haven’t opened their eyes, or rather to those who don’t have the courage to contradict the “Revolution” because of they haven’t noticed in 53 years it would be a real serious hypocrisy.

The dismissal of over 500,000 employees put a lot of people adrift and the solution to prevent chaos was the empowerment of licenses for the self-employed, now called vampires.

This great folly makes all the possibilities of increasing the economy unrealistic because creating this new form of work without the necessary preparation means that what the State sells for 80 cents in national money (Cuban pesos), the vampire sells for 2.00 pesos in national money, slowly bleeding the population to death.
But there is a no choice between buying in the State or the private market.  Incredibly, the private market doesn’t run out of product, while in many cases the State has no products to sell, forcing the Cuban to bleed financially.

But other limiting measures to prevent buying in large quantities, that affect the population, come to light, like limiting the purchase of packages of croquettes — 4 packages per person — which are acquired at 5.00 Cuban pesos and sold at 10.00 Cuban pesos by the self-employed.

But as the Cuban always manages to circumvent these limitations, the government can’t find a solution for this situation.