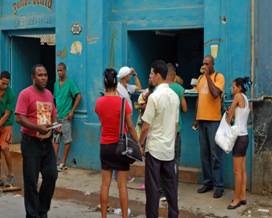 Anyone who has had the strength to watch and listen to the sessions of the National Assembly of People’s Power has reached the conclusion that 2014 is looking grimmer and grimmer.

After detailing a string of failures from various causes in both manufacturing and services, we are once again told that in the new year we will have to work smarter and more efficiently. In other words it is still all about good intentions and slogans which, as we have seen, solves nothing.

No matter how necessary, each measure to be taken must first be analyzed by a commission and then tried out in a provincial laboratory (usually Aremisa or Mayabeque) before it is implemented. Results, if any, are slow.

The authorities argue that those who want them to speed things up are doing the enemy’s bidding, trying to cause them to stumble. Besides being repetitive and unoriginal (it’s always the enemy’s fault), the argument is childish. The person who wants faster results is the average citizen, who cannot afford to keep wasting time on commissions and experiments.

Aren’t fifty-five years of experiments and innovations enough? Very few government leaders have had so much time to govern, especially after they have made mistake after mistake at the expense of their impoverished citizens.

To free up the sale of propane gas to the public, was it really necessary to try it out in Special Municipality Isla de la Juventud first? Even in the 1950s this was not normally how it was done. Just by picking up your phone and calling a gas company such as Shellane or Tropigas, a tank would be brought to your home and hooked up within a few hours. Must we first try out every measure, no matter how simple, before putting it into practice? It would appear the authorities feel the need to reinvent the wheel every day.

In short, everything that has been done so far is to correct some of the many mistakes that were committed through simple volunteerism and so-called openings amount to nothing more than the restoration of violated rights. They are aimed mainly at an emerging middle class and not the ordinary citizen, who lacks the resources to travel, buy a car, purchase and maintain a cell phone or pay 4.50 CUC an hour for an internet connection. This is the harsh reality.

When riders of Havana’s defective mass transit system board a bus through the front door, to deal with the overcrowding, the conductor repeats a ridiculous phrase: Move to the back. But they only move forward; moving back means moving backwards. This phrase seems to have become the principal currency of Cuban authorities.