Havana, Cuba, December 27, www.cubanet.org – In Havana’s Central Railway Station, they were fumigating — against the Egyptian aedes mosquito — with passengers inside (children, pregnant women, old people), violating all health standards.  And don’t mention freshening up.  They charge a dollar to use the bathrooms.  And even paying, the bathrooms do not have soap or toilet paper.

The self-employed cleaner told us:  “Some time ago the bathrooms lacked water, they were disgusting, they put a bucket for discharge, we washed them without faucets, the broken toilet bowls, the blocked urinals, we rehabbed the service, but we did have to watch that, because they stole even the brooms from us.”

The disaster of the railways

Almost 20 percent of Cuban trains do not leave or arrive on time. Train departures have been reduced. We asked, “How many trains run from Havana to Santiago de Cuba?”

“There are two trains, one regular and the other special, every three days,” the girl at the counter told us. “Today an extra leaves for Santiago De Cuba at 11 at night. The special from Santiago runs in December on the 24th, 27th and 30th at 6:27 in the afternoon, and the regular leaves on the 25th, 28th, 31st at 4:00 pm.”

The tickets to Santiago de Cuba have to be reserved in La Coubre Station, some 700 meters from the Central Station.  But those going to provincial town be careful! The regular train stops in some municipal stations, but the special to Santiago is express, it only stops in the provincial capitals.

And as the trip from Havana to Santiago lasts 15 hours, prepare to be hungry! They sell a few preserves in the cars, they run out fast. Vendors of bread rolls climb on at the stops with whatever. The railways do not offer drinking water, either. Bring your water. And if you can, bring a bottle for urinating, because the bathroom of the car may be overwhelmed, or worse, closed.

The same information employee, laughing, told us: “I prefer to urinate in a bottle.” 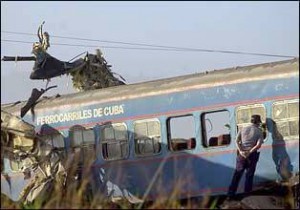 In La Coubre Station, under a fiber cement roof, a sign announced:  “There are no reservations until January 4.”  If you decide to travel, you have to go to the waiting list and sign up.  With luck they will sell you a passage in five days. For those who spend days sprawled on the floor, grumpy, the worst still awaits, boarding a dirty, stinky car, and suffering a tortuous trip.

One on the waiting list commented: “I’m going to Guantanamo, I have been here three days, I have number 500 in the second round, I’m not going today either.” Passenger number 2 added: “I am signed up for Guantanamo, but I am going to Santiago de Cuba. There is no other.”  Another told me, “I’m going to Guantanamo, I spent four days on the list, to be able to go today, I almost had to live and sleep here, but it’s the only way of hoping to spend New Years with my family.  And I almost have no money to arrive with; here, in the terminal, the food is very expensive, to eat I’ve used what little I had.”

Cuba was the second country in America to have a railway. On November 19, 1837, the first section from Havana to Bejucal was inaugurated. In 1859, the capital counted on streetcar service.  A decade later, the railway reached Calabazar, Santiago de las Vegas, Marianao, Cardenas, Jovellanos.

In the first decades of the 20th century, the island would complete the line from downtown Havana to Santiago de Cuba, with secondary branch lines to Pinar del Rio, and even la Bahia de Guantanamo. And it had an electrified network, the little Hershey train, which linked the Cuban capital with the city of Matanzas.

In 1959, the trains were the soul of sugar production, they gave life to towns and cities. They went to almost all corners of Cuba.

In 1961, the revolutionary government nationalized the railways. In a few years, the Cuban rail network which extended over 12,060 kilometers was reduced to 8,367 km.

In Cuba, the official press does not report — except in cases of death — railway accidents.  The Castro administration turned the shining gem of Cuban railways into a true disaster.