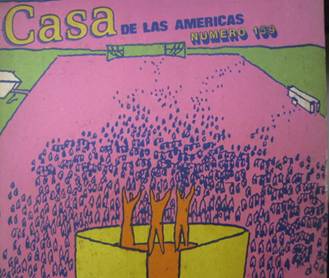 On October 18th the Jose Marti National Library of Cuba celebrated its 110th year, and for some months has been undergoing a complete remodeling of both the building and its organization. This is good news as its state of disrepair was obvious to everyone, after many years of neglect, but at a determined moment it became a kind of purgatory, where important intellectuals ousted during the so-called Gray Decade purged their sins. The fault of the Empire? Of the Blockade? If we are honest, we must recognize it was our authorities.

As the news here, even good news, is never complete, I call your attention to some statements by government officials. Speaking of digitalization, something missing in our Archives, Civil Registers, Libraries, etc — an effort pending at the national level — the deputy director explained that one of the hardest and most important tasks accomplished in recent times is the digitalization of the Historic Memory, mainly from the Cuban press from the years 1962 to 1970. Is the Historic Memory of the Cuban nation subsumed in these years? Are they the most important? What happens to the prior years from the 16th, 17th, 18th, 19th and first half of the 20th centuries? Are they not the most important part of the Historic Memory? I do not want to think that the official cited considers that the history of Cuba began on January 1, 1959.

The deputy finance director notes that the patrimonial endowments on floors 2 through 6, where documents from the 16th through 20th century are stored, are not air-conditioned, because to do so would require a very expensive system. I don’t deny it, but I think if a small percentage of what has been spent on political propaganda within and outside of Cuba were spent on this, the 16 floors of the library could be air-conditioned. It’s nothing more than a problem of priorities.

The same official advises that they are thinking of reviving the patio and its lush area, to serve at certain times as a public area. When the facility opened in 1958 this was the case, until someone decided to entirely fence it in, an epidemic that spread to other building in the Plaza and the city. To revive this patio is good, as would be eliminating the fences, anachronisms in a center dedicated to culture, but the principal activities of the Library should be realized within its building, for which it was conceived. Good service to its users in comfortable conditions, without the denial of access to important documents, including the archives, and eliminating the absurd authorization cards required from workplaces and schools, would be an effective step in the Library’s meeting one of its most important functions.

We hope that its re-opening and, although its endowment will continue to deteriorate (no solution is contemplated), we dream that at some point in this century, before they disappear completely, the majority of its documents will be digitized, for the benefit of citizens and the salvation of Historic Memory.