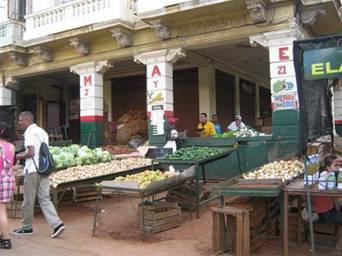 It seems that the announced upcoming monetary unification and the new mechanisms of established trade, plus the reduced production, have been the principal causes.

In our commerce, supply and demand are unresolved issues: they seem to be locked in due to many years of absence. A product costs the same from the time it arrives at the market until it goes bad, and discounts don’t exist, while the ordinary citizen finds his pension or wages are less every day, able to stretch to less and less, without any real prospects of an increase. He finds himself between a rock and a hard spot, hoping some family member “out there” will help him out by sending some money or that there will be a miracle, at a time when these seem ever more rare.

The discomfort this creates is palpable in the street, and there are few who don’t express it: you just have to listen to what people say at the bus stops and on the buses, in the stores, and wherever two or more people get together. In these conversations the authorities don’t come out very well. For now, it is only this, but no one can be sure that this will always be the case and that tomorrow, those who today only talk, might not begin to act. Everything is possible: it just depends on how many holes are left for tightening our belts.