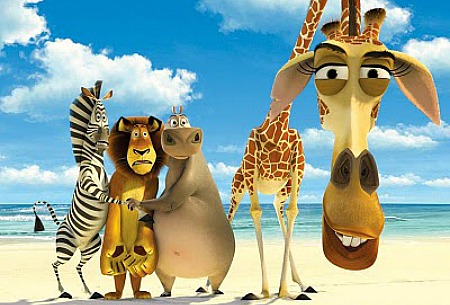 —What? About the robbery of the giraffe from Havana’s zoo?

—Yeah, a giraffe, four monkeys and a pony, but I’m not talking about that…

—Those guys must have been ninjas.  A Cuban version of “Madagascar,” “Calabazar[1]: The Story of How a Group of Zoo Animals Trying to Prevent their Friends from Becoming Giraffe Sandwich”

—No, I am talking about Robertico Carcasses, who was banned from playing music the other day.

—The truth is that he’s never been very good, but a ban seems excessive to me…

—Well, it was more for demanding direct elections, freedom of information and equal rights. You know, and it happened at a concert for the release of The Five[2].

—Listen, can’t you count?  A giraffe, four monkeys and a pony are six, no five.  Well, I guess what’s important is the solidarity with the poor little animals.

—No, dude, I’m talking about the five spies jailed in the Yuma[3].

—What do the five spies have to do with the giraffe?

—Nothing, you made that up. The deal is that Robertico Carcasses said all those things at the Anti-Imperialist Stage[4] and on live television.

—That’s the interesting part: they only thing they dared to do was to ban him from any state-owned stage in Cuba, indefinitely.

—In my time, for less than that Robertico would end up worse than the zoo’s giraffe.

—What? They already know what happened to the giraffe?

—That’s exactly what used to happen, you’d never hear of them.  Now, they only beat you up, and if you resist, they’ll throw you in jail for five years charged with contempt. Times change.

—Well, this time there was a commotion and even a member of Calle 13[5] protested the ban.

—Which one?  The one that looks retarded?

—No, the other one, the one that doesn’t sing.  The deal is that even they didn’t know how solve the imbroglio when Silvio Rodriguez[6] himself stepped in.

—Jeez! I thought it was the blue unicorn[7]. I was afraid that on top of the giraffe we would now have to deal with Silvio’s little animal.

—So, Silvio showed up saying that what Robertico had done was a great faux pas, but that the punishment should be something else.

—Or like Cardinal Ortega, who intervened when the government had run out of things to do against the Ladies in White.

—Well, the Cardinal Ortega of UNEAC[8] got the penalty lifted.  He had to announce it himself because for the official media Robertico has never sung.

—See, we agree on something. The Comandante[9]’s words to the intellectuals[10]have been transformed into “With Silvio, everything, without Silvio, nothing.”

—Why? Because they are going to eat him?

—No, it’s just that he’s not good at taking care of animals.  Look at what happened to the unicorn.

[1] Calabazar is a town south of Havana.

[2] Also known as the Cuban Five.  These are five convicted Cuban spies serving sentences in the United States since 2001.  They were part of a large group called The Wasp Network (Red Avispa).  Twelve were arrested, only 5 pleaded non-guilty.  These are the only ones that the Cuban regime defends.  One of them was released in 2012 after serving his sentence. He renounced his US citizenship, and moved to Cuba. So, The Five are really The Four now, but the Cuban regime has never been good at Math.

[4] Tribuna Antiimperialista in Spanish.  It is a large stage set up in front of the United States Interest Section in Havana to show state-sanctioned protests against a number of actions by the US.

[5] Puerto Rican hip-hop group and a darling of the dictatorships in Cuba and Venezuela.  They have performed at the Anti-Imperialist Stage.

[6] Silvio Rodriguez is a famous Cuban singer-songwriter who after a brief period of rebellion in the 1960s, became one of the regime’s official troubadours and later on even a delegate to the National Assembly.  He wrote among many songs, one titled “My Blue Unicorn” dedicated, according to many, to a lost trophy in the shape of a blue unicorn.  It has become his avatar.

[8] UNEAC is the official Union of Writers and Artists of Cuba.