I agree with Jesus, friend and owner of a Moscovitch car from the eighties, who tells me his ex-wife is very ill but has not gone to Rincón to pray to Saint Lazarus, but he had to accompany nearly thirty neighbors and relatives who hired him to drive them to the famous leper colony of Santiago de las Vegas, south of Havana.

“I don’t like to go because the landscape is bleak, especially between December 16 and the middle of January, but it’s difficult to refuse them because they are people who pay for the trip to keep their promises. They have souls full of faith and that’s admirable. The problem is what you see before you arrive and while waiting for your client: beggars of every kind, deranged people who drag stones and chains and aggressive vendors who take advantage of the circumstances. 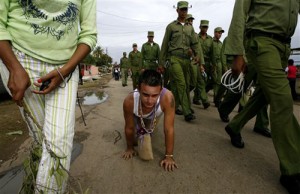 Jesus is Catholic by inheritance though he rarely goes to church; he knows the Bible, the rituals, the saints and collects stories and stamps and likes to gossip about the legends of St. Lazarus, the Virgin of Charity, the Virgin of Regla and other venerated Cuban saints.

He says that in the Bible two Lazaruses appear: that of the dogs, and the Lazarus of Bethany, brother of Martha and Mary. He says the story about Lazarus of the dogs is a parable of Jesus Christ, that is an illustration to focus on reality, which is something imaginative and nonexistent recorded in the words of the Gospel Luke.

I ask him if it doesn’t seem like an evangelical interpretation, not very Catholic, but he asks me to let him continue, because “Christians and Protestants worship the same God and study the same Bible, although the latter rejected the images and disagree on various points.”

“In the parable of the rich and the poor, Lazarus was the sick beggar who asked for the crumbs of the powerful; only the dogs pitied him, so they appear at his side in the images reproduced by his worshipers. Both the rich and poor died the same night, but God only received the beggar and send the miser to hell.”

I inquire about the other Lazarus, that of Bethany; he explains that he existed, he was a friend of the Lord and resuscitated Jesus Christ four days after he died, although little is known of his existence, so the sacred legend merges Lazarus of the parable with the true one, perhaps because neither knew how to solve their problems in life.

Seeing that I’m smiling, Jesus asks me, “Can you imagine Cubans without the promises of Saint Lazarus and the appeals to the Virgin of Charity? Don’t they seem more believable and worthy of reverence than our rulers?”