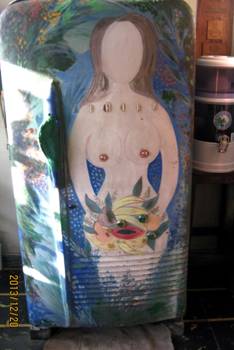 In 2005, the then president and prime minister of our planet appeared before TV cameras in order to explain to the population the benefits of the hitherto despised home appliances, which from that moment would be distributed in all the country by household through the infamous Ration Booklet.

I remember that, when in the 1970’s I moved to Nuevo Vedado, I had an electric stove with three burners and an oven, acquired in Paris in my diplomatic years, and each time I went to buy products with the Ration Booklet in the market that I was assigned to, they talked to me about consuming too much electricity.

Three decades later, the same people who reprimanded me came to offer to exchange my old but magnificent 1949 Admiral refrigerator for a Chinese one, which according to them would consume less. Of course I refused, because you had to give up the perfectly functional one you possessed, without getting a cent of its value, as if it were scrap, and pay an exaggerated price for the new one.

Fortunately, I maintained said negative response on repeated occasions, until they got tired and insisted no more. All those people who fell in the trap of the new appliances are regretful, because they broke after a while and there are no parts with which to fix them, but they still have to continue paying for them.

The same thing has happened with all the low quality Chinese equipment: mountains of aluminum and twisted cables fill the shelves and warehouses of the famous consolidated workshops without them being able to be repaired for lack of replacement parts.

It is shameful that some commission from the National Assembly has to spend so much time and saliva talking about “Queen” pots and broken appliances, in a country where there are so many urgent problems, like the bad state of schools and hospitals, the almost non-existent sugar production, the lack of basic necessities in the stores, problems with milk production, potatoes, in sum, with everything that is vital for the population. Gentlemen, certainly it shames the National Assembly that you have to air issues as ridiculous as the broken electric pots, already obsolete.

I believe that the decision I made three decades ago, not to be dazzled by the “electric re-involution” and not to go into debt buying those Chinese products, was most wise. My old Admiral refrigerator, decorated by me, continues cooling like a charm, and I do not owe a cent to the State.