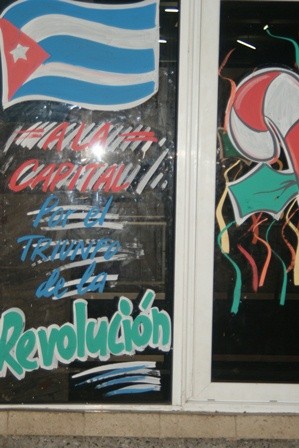 My first surprise on arriving at the local bakery is to find the windows painted with congratulatory phrases for the new year of the Revolution. Revolution no longer looks like a word. It is the image of a beast with many eyes that devours the hearts of people.

Last year it wasn’t like this, sometimes these paintings grow old celebrating an old year. But this year you might think the transfer of power having happened a few weeks ago in Venezuela, and with Cuban tempers anxious about the memory of the blackouts of the ’90s when Soviet oil ran out and there was much less to eat, that now when hunger isn’t our sister the political leadership from top to bottom supposes that some fresh paint is a pat on the back for the people.

But the bread is so bad, it smells sour and I have no more money, nor other bakeries where I can get it. This isn’t even the 5 centavo bread that I gave up buying because there isn’t one time when eating it, when I had no choice, that I didn’t have a feeling of defeat. This is the unrationed bread that makes the political types of the neighborhood proud, and even the bakery clerk.  I don’t want the bread. The other clerk shouts in front of everyone, “She never conforms.” For a few seconds I was ashamed.

The filth everywhere. In Cuba respect is bought. But truth is not respected. It’s a simulation like everything else. The only certainty is snot, dirty fingernails, dandruff, and ideological political verbiage that steals the meanings of words and disrupts the existence of so many people.

So as not to give the impression that my protest arises from the problem of empty pots and tattered clothes, I usually set aside domestic problems and start writing. Of course, when we reach that point, and life descends into its most basic configurations, we suffer too, but a reader far from other Cuban problems could think that if the pots were overflowing with the aroma of meat along with colorful vegetables, and we could all look more elegant and fragrant, the problem would end. Nothing could be further from the truth.

There are days I explode. I’m sick of the sweat and snot, the filth and above all the ostracism. The lack of respect. You could say no one is responsible for this situation. However, if there’s a lack of responsibility in this society it is precisely political responsibility, which affects our social life and chains us together. The astute State has deprived us of our political rights and decorates the shop windows in celebration of it. Submission guarantees the stability of this situation.