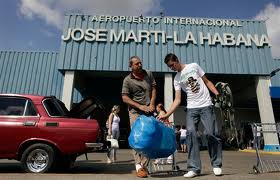 Moved to curiosity on hearing, by different routes, the news that the ceiling of the airport failed due to the weight of the empty suitcases hidden in it, I wanted to know the real truth, which is, as we all know, an approximation.

About four years ago in Terminal 3 (International Flights), a false ceiling gave way under the weight of empty suitcases, hidden there after having been stolen.

In February of this year, Terminal 2 (U.S. Flights) recently remodeled, saw its roof turned into a swimming pool during a downpour. The roof didn’t collapse, but the water ran over the eaves and fell in a waterfall over the administrative area, pooling in the false ceiling which had to be taken apart and emptied piece by piece. The drainage off the roof was thick with debris and a mix of soft drink cans tossed there through the negligence of the workers during the repair.

It seems that both news items joined together to give form to the rumor now circulating.

Theft, negligence, common themes. How many examples can be found simply by looking up.