14ymedio, LUZ ESCOBAR, Havana, 17 January 2015 — “Where is the end of the line for a picture with the Cuban bear?” yesterday asked a youngster during the opening of the United Buddy Bears show in Havana’s San Francisco Plaza. The project, created in 2001 by Eva and Klaus Herlitz with the collaboration of Austrian sculptor Roman Strobl, promotes a message of tolerance and understanding among all peoples, cultures and religions of the world. The exposition has travelled across five continents with life-sized sculptures of bears that evoke the member countries of the United Nations.

With the participation of artists from each of the represented countries, these bears have visited cities such as Vienna, Cairo, Jerusalem, Buenos Aires, Montevideo, Paris, Hong King, Istanbul, Tokyo, Sydney, Warsaw and Rio de Janeiro. Since its first exhibition in Berlin in 2002 they have been appreciated by more than 30 million people. Now, they are in Havana, which highlights the signature sculpture of our country, made by Cuban artist Nancy Torres. 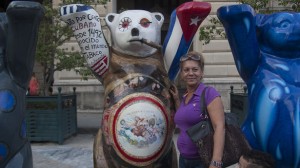 With a cigar in his mouth, a cigar band around his waist and a mischievous wink of his eye, the Cuban Buddy Bear is part of this diverse and plural group. His creator explained during the opening that she named him Siboney in homage to the first Cuban Indians and that she crafted him to include the colors of the flag. “He has traveled through many countries since 2002 which was when I created him,” added the artist. She also emphasized that, “I have lived in Berlin for more than 50 years. In this bear are rejoined symbolically the two heritages that I have: Berlin and Havana.”

Also participating in the ceremony was the German ambassador to Cuba, Peter Scholz, who said that he hoped that “the bears are capable of sharing much pleasure and happiness during the next six weeks and attracting visitors from all over. Because I hope that the bears give us much zest for life.” The show will be in San Francisco Plaza until the beginning of March of this year and during this time it is expected that a three-foot high replica bear that represents Cuba will be auctioned off.

For his part, City Historian Eusebio Leal Spengler noted the importance of the moment in which the bears have arrived on the Island. “I am happy to imagine that now revived with the colors with which each artist sees the world they are here in the heart of the Historic Center, a World Heritage Site, giving meaning to that vision of opening, and, as has been said, tolerance.”

Leal Spengler’s words alluded metaphorically to the re-establishment of relations between Cuba and the United States when he thanked “the embassy personnel who came to ask if it could be and my answer was, immediately, let the bears come. May they be announcements of a better time, now that the salmon that so please the bears are jumping in the river’s currents.” 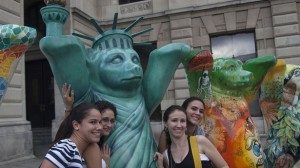 Havanans have already chosen their preferred bears and stand in line to get their pictures taken in front of the one that represents the Statue of Liberty of the United States. Among the most appreciated also are those of Spain, France and Germany. Meanwhile, the Cuban bear has received several critiques from those who see the inclusion of the cigar as a promotion of the harmful habit of smoking in an exhibit that is aimed mainly at children.

The United Buddy Bears exhibit has been associated with projects by UNICEF and with help for needy children. From donations from local organizations and the auction of some pieces so far about two million euros have been raised for the children. The project promoters Eva and Klaus will accompany the bears during their Havana stay.