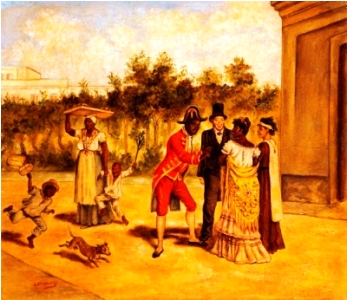 For the first time ever since I can remember, I am seeing butcher shop employees wearing gloves and caps. The ones who don’t have gloves use plastic bags. The same is true at bakeries, where employees routinely handled bread with their bare hands, though a few minutes before they might have been smoking, scratching the dandruff on their heads or picking their noses. This healthy practice in networks of retailers “subsidized” by the ration card is simply a rare novelty.

Garbage receptacles, usually overflowing, are being picked up more than once a day; TV commercials insist on the importance of good hand washing and boiling drinking water, and inspectors of privately-owned cafes and kiosks which have not been shut down are warned about food that should not be offered for sale these days: soft drinks, smoothies and juices, rolls with homemade mayonnaise, merengue or other sweets that are made with raw eggs.

These signs are an indication to us that something serious is going on, and that cholera is more widespread than we think. Violations of even the most basic standards of hygiene have been so common among us that the implementation of any sanitary measure jumps out by contrast, and it screams what authorities keep silent about… Of course, cholera is not appropriate in a medical superpower and even less in a tourist destination.

In the city, people talk about nothing else. It is not a fearful whisper or a secret between best friends, but an increasing alarm that neighbors talk about from window to window, friends, wherever they meet, taxicab drivers, street and fruit sellers on any corner: there are a lot of cholera cases in the capital and an undetermined number of fatalities, including a child. Several schools and kindergartens have closed, as well as numerous cafes.

Not only do foci of the disease exist in populations in the periphery, such as Regla or San Miguel del Padrón, but it has spread to municipalities as populous as Cerro, Diez de Octubre and Centro Habana. We all know that Hospital Salvador Allende (Covadonga), in El Cerro municipality, is at capacity between patients of dengue fever and cholera. An epidemic like this may have been just the thing we needed to return to XIX century conditions.

However, although cholera arrived on the capital many weeks ago, the final 2012 reports stood out in their flag-waiving when referring to health standards. The president of the World Health Organization also had words of praise for the Cuban medical system and its fabulous advances. Above all, fans of the Cuban government insist on praise for programs “that guarantee medical care for Cubans and other peoples of the world.” On a more spiritual level, ecclesiastical authorities and babalawos*, who have been so concerned about the health of the Venezuelan President, do not seem very motivated to invoke the protection of God or of the Orishas** for our people. We obviously have nowhere to turn.

For the time being, the media have not reported the presence of cholera in Cuba, or the magnitude of the epidemic. Apparently, they don’t feel any pressure from international health organizations of which Cuba is a member. While food vendors close their establishments or put on gloves on their hands, the Cuban government –literally- washes theirs.

Translator’s notes:
*Father or master of mysticism’ in the Yoruba language
**Spirit or deity that reflects one of the manifestations of Olodumare (God) in the Yoruba spiritual or religious system