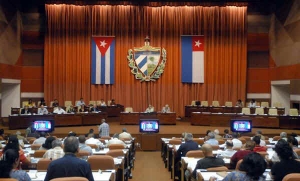 I have read, with a vast amount of resistance, the student-worker-politician biographies of each one of the “candidates of the people” in the forthcoming elections for the National Assembly of People’s Power, published in the official press. As they repeated to the point of monotony the same indicators, they all look alike, regardless of whether they come from education, work, or political centers.

It’s obvious that everyone, without exception, is actively integrated into the Cuban “model,” having been prepared, trained, selected and promoted to work in schools, colleges, universities, industrial, agricultural farms, cooperatives, government, trade unions, political and mass, religious groups and other areas, mainly because of their political and ideological loyalty.

It does not appear, anywhere, that there is anyone who thinks differently or has a proposal different from the official to solve the great economic, political and social challenges facing the country.

Avoided, and are not represented, are the nearly two million citizens eligible to vote in the last simulation of an election, who in one form or another — not going to the polls, canceling their ballot, or leaving it blank — showed their rejection; or those who, voting, did it more out of fear of losing their eduction, employment or certain positions than out of conviction; it is well known in every neighborhood that these latter have not the slightest qualms of saying so to family and friends. For the authorities, the first do not form a part of the people: they belong to the category of non-persons.

The electoral straitjacket guarantees that there are no black sheep in the fold, calling into question the historical unanimity of the National Assembly. Some names are replaced by others who will act identically to those replaced: the method ensures that nothing will change. Different opinions, respect for differences, diversity, tolerance, criticism, etc., are good for speeches, but are not to be applied in reality.

This means that in 2013, unless a miracle occurs, we will continue to have more of the same, because they have touched nor will touch the existing economic, political and social structure, the main cause of our failures and prolonged national crisis.

Until we have a National Assembly that represents all sectors of society, with their differences, complexities and problems, an Assembly to replace the current one, with its default percentages of whites, mestizos, men, women, old, young, workers, peasants, intellectuals, religious, etc., there will never be a challenge, not one vote against anything, not a single abstention from what the Government proposes. The unanimity will continue insured by the authorities who are unable to govern without it.