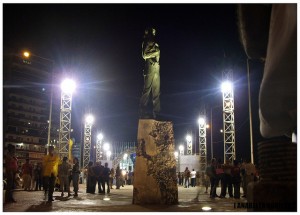 HAVANA, Cuba , September www.cubanet.org – The musician Robertico Carcassés crossed the line. According to his detractors, he chose the least appropriate time and place to ask for — in addition the release of the four Cuban spies and the end of the “blockade,” as dictated by the script of the show — free access to information, the ability to elect the country’s president by direct vote, the end of the internal blockade imposed by the Communists, and freedom for… “Maria.”*

He asked for all this while singing at a televised concert held a few days ago at the Anti-imperialist Bandstand — which people call the “Protestdrome” — the usual site of the anti-Yankee dance parties organized by the government. This time, the goal of the spectacle was to mark the fifteenth anniversary of the imprisonment of the spies-heroes and, of course, to once again demand that the Yankees release them.

Robertico immediately became an outcast. He was banned indefinitely from performing on  stages and in the media owned by the government; that is, all of them. The incident should be enough to shut the mouths of those who talk about a relaxation of censorship in Cuba. The spaces for self-expression, the topics discussed and what can or cannot be said, continue to be dictated by the official agenda.

Crossing the line when it comes time to criticize is still dangerous. The “new airs of freedom” are only symbolic; part of a plan of image improvement to create the illusion of an opening. Pure marketing.

Except for some intellectuals, writers, artists and academics, who now and again speak critically about the country’s problems, the majority prefers to entrench itself in silence.

Unfortunately, the criticisms of the few who dare never make it to television, radio or the printed newspapers, they remain only in books and specialized magazines that very few people read. They don’t circulate.

The other ways to disseminate these ephemeral ripples is the blogosphere, in a country where less the five percent of the population can access the Internet. Given the prevailing apathy and the impediments mentioned, the few critiques pass without pain or glory, without any major social impact.

For this and other reasons, it’s not coincidence that demands, in addition to being few, are timid, ambiguous, and generally accompanied by a petition against the “blockade” and do not mention the origin of our problems, nor those to blame, despite the fact that everyone knows who that is. They “play with the chain, but not with the monkey.”

Robertico Carcassés began his Via Crucis. Some members of Interactive, the group he directs with great success, immediately distanced themselves from what he said at the Anti-Imperialist Bandstand.

In an open letter he reaffirmed what he said in the concert. An undoubtedly brave gesture that puts his victimizers in an uncomfortable position.

With the exception of his request for the release of the five (four), I make public my support for the musician whom I already admired for his swing and piano playing, and whom I now admire even more for asking, on television, for the inalienable rights of all Cubans.

After writing this text, I learned that this Tuesday, after a meeting with functionaries from the Ministry of Culture, the punishment of Carcassés was lifted.

It seems that one of the craftsmen of the pardon was the influential Silvio Rodriguez, one of the artists most committed to the regime, who occasionally posts in his blog points of view contrary to the official line. The intervention in the matter of Violeta, daughter of that famous troubadour, due to the official reprimand received by her husband, Oliver Valdés, Interactive’s drummer, for mentioning in a program the punishment against Carcassés, may have been a catalyst for the unexpected outcome.

Has Carcassés privately recanted? Committed not to repeat the mistake? Who knows.

Now surely the perks-as-deterrent will come. Almost certainly he will get, without delay, permission to buy that car he’s been after for a long time. Perhaps even the usual, “What’s that you heard? I didn’t say a thing.”

Regardless of the speculation surrounding the incident and his motivations, the symbolic value of the event itself should be noted, the importance of the direct demands of the young, made for the first time on national television, in front of the cream of the communist hierarchy and, what’s more, on the most sacred of stages.

*Translator’s note: Robertico asked for the release of the “heroes… and Maria…” whose identity remains a mystery.