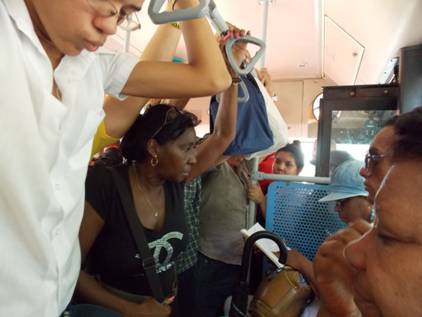 The heat was deathly, the Route 27 bus stop overflowing with people, from which we could conclude that not a single bus had passed for a long time. Asking one of those present, I was told they had been waiting for more than an hour.

I hadn’t been at the stop five minutes when I saw in the distance the yearned for “ghost bus.” We all ran towards it, having divined the intentions of the driver to not  stop where he was supposed to, which is a common occurrence. Between pushing, protests and rude phrases, I managed to climb the step, and at just this moment I was confused because the difficulty of getting inside was greater than I already knew it would be.

I’m sure I haven’t gained weight, I told myself, clinging to my bag, which I was wearing, as usual, hanging from my shoulder, and I put it in front of me. At that moment I realized that the narrowness of the access was because on both sides of the entrance steps where you access “the belly of the beast” they had placed some iron bars, like those used in corrals to guide the cattle into the pens.

Addressing the driver, who in these moments had left the wheel and was standing next to the fare box trying to collect, I protested loudly so that he could hear me, but those behind me were rudely pushing me, making me afraid to stay there. Whomever had designed this device, I said, thought that we passengers were cattle being led to the slaughter, without realizing that there were no cattle here, only sheep.

Nobody responded, everyone continued pushing and elbowing each other until finally, squeezing by, we managed to get aboard. Then the driver closed the doors and took off at full speed, and then two blocks later scared us all by braking suddenly at the red light at Paseo Street. We were all shaken up and when he started up again we fell all over the inside of the bus like dominoes.

The “brain” that designs these horrendous orthopedic gadgets, which are nothing more than technological bars, didn’t consider the safety of the passengers at all, because if there were an accident or a fire they would make evacuation extremely difficult.

Nor did they consider the discomfort of disabled people who have to use crutches, or the obese people who can barely squeeze into the bus without hurting themselves, or those who travel with children in their arms.

If the objective is to assure that citizens pay their fares, the solution would be selling the tickets ahead of time, which would also avoid the driver “appropriating” the corresponding change. This is another unresolved problem, because when you pay with a peso (often scarce) the driver always keeps the change from a forty centavo trip.

Every day that passes we receive the worst treatment on public services, but as the majority of us accept it calmly and quietly, the authorities have come to believe that we really are animals and they treat us like ones.