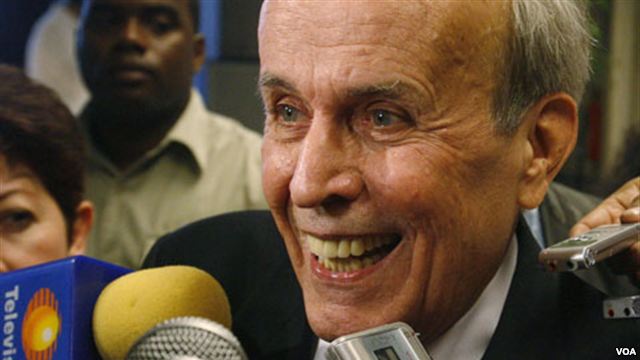 In Cuba, a State defined by pimping and patronage, the National Assembly of People’s Power (ANPP) which cannot be anything other than a sort of private club where the criminal jet set meets, serves as the highest legislative body. Ricardo Alarcón de Quesada is the human detritus with great histrionic ability who presides over this institution.

A man with the worst reputation, Alarcón is like a fire that gives off neither light nor heat, a symbol of cynicism and ineptitude. Born in Havana on May 21, 1937. The face of an idiot, gradually increasing in intensity over time, combined with intentional social-climbing and growing ambitions, he entered the University of Havana in 1954.

Called “Richard” from the time he was young, he was known as a devout Catholic bordering on fanaticism; later he decided to be called “Ricardo” because a Revolutionary shouldn’t use an English name; from 1961-62 he headed up the Federation of University Students (FEU). That year he was appointed director of the American Department in the Ministry of Foreign Relations (MINREX).

Using shameless old tricks like a cane, and with the clear intention of becoming a capital in this incredibly profitable company called “Revolution,” he achieved the needed confidence and with that was named Cuba’s permanent ambassador to the United Nations, traveling with his wife Margarita Perea (now deceased) and his daughter Margarita (“Maggichu”) Alarcón Perea.

In New York he chaired the board of the United Nations Program for Development (UNDP), and was second chair of the UN Committee on the Exercise of the Rights of the Palestinian people.

From this time many remember his phrase “Macy’s is paradise.” And of his rapid ascent an ugly reference is still hear, which they say came to Havana by Don Javier Perez de Cuellar (UN Secretary General 1982-1991).

With shameless deceit and sending expensive gifts to senior leaders (the fundamental objective of the Cuban lobby and diplomacy), Alarcón de Quesada managed to get himself named Foreign Minister of the Republic of Cuba. In 1993 he assumed the presidency of the National Assembly of People’s Power. Despite his deplorable management has been re-elected; his work, in addition to being ridiculous, is reduced to the demand for the return of those Cubans who, for some, are spies, and for others are five heroes.

Murder — to my knowledge — he has not killed anyone; but faced with a just demand he always looks away. The prize for loyalty he achieved with his terrible “special action” toward his own sister when she tried to leave the country. Faced with such complicity, he chose to continue committing crimes without a trace of remorse. And so he shows his “loyalty.”

Today, along with General Raúl Castro, Alarcón is a co-protagonist in the game towards an unfavorable transition for the Cuban nation. The clever ruse creates worldwide expectations, trying to make us forget an unnamed holocaust.

A repulsive character, creator of absurd actions, whiner, he has no higher purpose, no sense of honor. Dignity is not his strong suit.