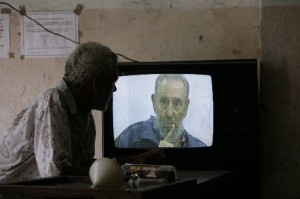 I heard an old joke the other day while I waited at the bus terminal in Havana. It was about the ex-president Fidel Castro Ruz, who returned to the media during the last weeks of July, despite his deteriorated state of health. Such an appearance was subject of much irreverence. However, the official press of the island only pointed out the tragic, yet comical, declarations made by the veteran commander.

In the joke, Fidel comes out of hell and explores the island, where he confirms that nobody remembers him. He also notices that there are no statues, monuments, plazas, or institutions that evoke his name or his work. Finally, he arrives at the National Library and after he searches around for a while he finds an encyclopedia that includes this in the index card: “Fidel Castro Ruz, Cuban dictator who reigned during the era of “Los Van Van.”*

I only hear Fidel Castro’s (and his brother Raul’s) names every once in a while in jokes. Up to now, there are certain comparative relations between taunts and the supporting media of the mandarins, whose figures surpass the popular imagination, especially Fidel, who is bent on giving off the notion that he is healthy and well, while warning about international catastrophes as if he did not live on the island, or as if it were impossible for him to get out of his state of limbo.

Such jokes prove that not even excessive power can free a man from being made fun of. At the bus stop and in the buses, their names are barely ever mentioned. In public areas like parks, waiting rooms, and in long lines outside stores, there are more than enough allusions made to unleash the criticisms, especially among young people, whose irreverence shatters the limits of respect.

Trapped in the time of the Castros, with so much propaganda about heroes, wars, blockades, productive methods, historic anniversaries, and social promises, people who lack agendas express their opinions with jokes and brief phrases that demystify the rhetoric and confirm the hopelessness; as if all the scarcities and tensions of immediacy bring to the forefront the narrow interests and petty passions of official discourse.

The more Fidel Castro tries to confuse or misinform Cubans (like a gas lamp in the middle of a dark cave), the more their indifference grows in regards to his “historical legacy.” The jokes replace the “veneration” that the people show him. For many, he is no longer the Commander, but instead he is the Mummy, the Ghost, the Deceased One, the Prophet of War, the Risen Devil, or the Old Hag.

Raul Casto, who is less historic and less popular cannot avoid the list of retired demons, which includes Ramiro Valdes Menendez, the triad of Jose Ramon (Balaguer, Machado Ventura and the Spaniard Fernandez), Ricardo Alarcon (spokesperson for the heroes), and semi-gods like Abelardo Colome Ibarra (aka Furry), Casas Regueiro, Ulises del Toro (General Marabu), and other uniformed figures who head all sorts of ministries and make up the Political Bureau of the Communist Party.