During May, a Spanish friend of mine brought me three books.  One was from Xavier Rubert de Ventos about the book of Aung Suu Kyi (leader of the Burmese opposition), and two others were published by Cubanet in 2006; the first was about the essay The Power of the Powerless from the Czech writer and politician Vaclav Havel, and the second was How The Night Came, written by the ex-commander Huber Matos who tells about the Cuban revolutionary process and about the installation of the Castro dictatorship.

They are three different works that differ and converge in regards to the subject of totalitarianism, and which offer some key suggestions on how to confront fear and repression.  Since they are books that are banned in Cuba, I will briefly comment about the one least smuggled throughout our island, the one written by Aung Suu Kyi entitled Free from Fear, edited in Barcelona in 1995 by Galaxia Gutenberg.

Aung Suu Kyi received the Nobel Peace Prize in 1991.  The previous year she had won the elections in Burma, while heading the National Democratic League, but the military prevented her from taking power.  Despite the deprivation and confinement she still is under, she analyzes the essential problems of her country.  They are general reflections that reach out to readers of various interests, and they do not harm the sensibility of those whose opinions differ.

In Free from Fear, which contains a prologue by Vaclav Havel and Maria Luisa Penela, the leader of the opposition movement of the Asian archipelago describes the corruption in her country, the most intimate of mechanisms used by those who hold on to despotic power, and the need to overcoming fear- that emotion which deforms the soul and bends willpower, gives way to oportunism and other attitudes that favor domination over the masses, which we can relate to here on this end.

She highlights that “Fear turns us into complices of oppression, just like bravery makes us allies of the truth” She then warns that, “In order to reach that truth we should free ourselves from the debilitating virus known as fear, which erodes our reason and conscience, eclipses us, hurts us, and humiliates us.”

The vital experience of the author allows her to appreciate the fact that “Servitude is not only a condition, but also a passion,” a passion previously described by Hegel and Goblot, and later analyzed by Canetti and H. Arendt, according to X.R. Ventos, who assures that Suu Kyi, like Havel, “inverts the logic of distinction between a deprived morale that refers to sentiments or convictions, and a supposed public morality, that should be a secretive, astute, Machiavellian, and full of historic Missions or of Universal Destinies, or Utopian revolutions.  This mix of cynicism constitutes the current political “common sense” that Suu Kyi denounces as a variant of fear itself.” 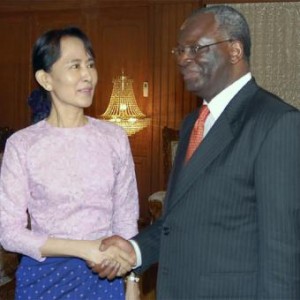 In closing, we must point out that: “One of the most harmful forms of fear is the one that masquerades as common sense or prudence, and rejects as thoughtless or frivolous small acts of courage that maintain the sense of dignity and respect for oneself. ”

She appeals for a “heroism without illusions” recalling that “saints are sinners who continue on with the struggle.”  A struggle… more heroic when conscience holds that its objectives are as unreachable as they are unrenounceable.

Aung Suu Kyi’s book, like the generalizations made by Vaclav Havel in The Power of the Powerless, acquires a value thanks to its universality, its accurate perceptions about totalitarianism, and because it differs from traditional politics and the electoral discourses offered by Justice, Freedom, or Abundance, but without freeing us from the fear that keeps us from reaching those goals.