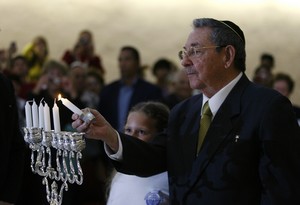 In the pantheon of history Fidel Castro will have a place. The only commander and leader of the Cuban revolution for good or evil has earned it for himself, and in the future, after his death, fables will be woven about him.

His brother Raul knows he never was the smartest in the class. He has his feet on the ground. His is to do the dirty work. To try to sort the mess and chaos created by his enlightened and fraternal brother in the 50 years he was in power.

The economy wasn’t something Fidel was good at. And look, he tried. He could read in one sitting complex theoretical books on how to create wealth and lead to the safe harbor of a nation’s economic structure.

Nobody doubts his skills as oral snake charmer, his cunning to handle military situations and his ability in foreign policy, but Castro has one major flaw: he pays little attention to the opinions of others.

In the economic sphere he failed. From when he decided to plant coffee in a ring around the capital, create a race of dwarf cows to give pints of milk for the family breakfast, or to try to grow strawberries, apples, grapes, pears and peaches in the center of the country.

His disasters in economic terms may have been more expensive than those generated by the U.S. embargo. He even tried communism in the town of San Julian, Pinar del Rio, to see how it worked.

Castro is just Castro. You can agree or not with his outlandish doctrines, but in the end you end up loving him a little. Perhaps out of pity. But if anyone in this world loves him it is his brother Raul. For many reasons.

By blood, ideas, and theories of his big brother, Raul was always in Fidel’s tow. His were not the brilliant elocutions or sweet-talking a political adversary or a lit-up crowd.

Raul was better given to administering a war zone, as he did with the Second Eastern Front in the guerillas war, and listening without interrupting his friends or those more capable.

His mission was that things should work acceptably well. And he did it. If anything in Cuba works like a Swiss watch, it is the armed forces. Also the dozens of businesses run by managers in olive green.

Castro II doesn’t have such an ego, neither does he believe himself to be a fantastically gifted military strategist. Even the Cuban wars in Africa were managed by a Havana cigar chewing brother Fidel from a house in Nuevo Vedado, replete with maps and mock-ups where the Maximum Leader moved miniature tanks and little tin soldiers with ease. Even the caramels and ice cream pots eaten by the troops in Angola and Ethiopia were administered by Fidel, with that incurable mania of a grocer that he possesses.

Then the year 2006 arrived; a tremendous year for Cuba. Fidel became gravely ill and death began to stalk him. It came Raul Castro’s turn, who for quite some time together with his battalion of military technocrats had already been trying to straighten out the path of the precarious local economy.

His steps have been timid, slow, and prolonged. We can’t expect large changes from Castro II after the 6th Congress. He is a long-time Communist and a believer in having State institutions be rational and efficient.

This much is certain: he is far from being a democrat. If he doesn’t lock up his opponents, independent journalists and bloggers right now, it is because the era of the Cold War has been left behind.

But the General wants to leave a legacy. To create the foundations on which tropical socialism can operate full steam ahead. The task is for titans, but he has no other choice.

And his biggest enemy isn’t the dissidents nor the gringo embargo. No. It is time. Without criticizing his cherished brother, he has meticulously dismantled the ludicrous way of managing and supervising the management of the country that Fidel had.

We already know how El Comandante did it; Olympically hurdling institutions, presuppositions and ordinances. Castro I did not believe in rules. He was God, and Gods do not respect the norms. His brother knows that time will run out soon. Because of that he wants to leave the rules of the future political game well-written.

Now Cuba will not tolerate yet another enlightened warlord. Therefore, the General takes his forecasts and dictates that all political offices shall be elected every five years, and no one person can stay in power for more than ten. It’s logical and makes sense — it is demonstrated that a politician has a short useful lifetime.

The sweetnesses of power are treacherous. The hard part for Castro II will be to get people who are both young and blind believers in that German jew named Marx. Marxist theories don’t sell so well in Cuba. It is a lot like wanting to go back to silent films in black and white. Jokingly, the average Cuban calls the author of Das Kapital “the guy who invented misery”.

Also, for five decades the young managers who wanted to make career paths in government fell noisily, always accused of desiring power. An urgent task for the General is to find a talented replacement who can run the Republic in the medium-term future. Another is to see if the economic plan of Castro II works. The majority thinks not; but after 21 years of touching bottom, worse off we shall not be.

When people feel more free to speak and their lives improve is when the true contradictions will start. For then, by the laws of life, the Castros won’t be among us.