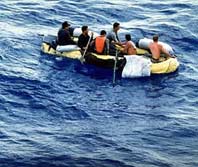 Julio Cesar Rifa and Roger Pupo Fariñas are completely without legal defense and they have no way to remedy this situation. There is no lawyer to be found who wants to oppose the Captain of the Port of Havana for harm wrought against their legitimate rights

On the 17th of December of last year, the authorities surprised them, together with four others, in waters near the coast on a raft that they had built themselves, in a failed attempt at leaving the country. “There had been bad weather and we decided to return to port,” Pupo Fariñas confirmed.

On the third of March of this year, two and half months later, lieutenant colonel Jorge Luis Aluija Urgell issued a decision that affirmed that the six rafters had committed a serious infraction. “They constructed a crude method of departure in which they later navigated Cuban waters without the permission of the office of the Captain of the Port,” as was detailed in the decision.

In 1994, by political decree, under the auspices of protection granted by international treaties (migratory agreements), the Cuban state decided not to criminalize Cubans who leave the country illegally by way of sea in precarious, usually homemade, vessels that put their lives at risk.

Nevertheless, the government, by way of the office of the Captain of the Port, prosecutes administratively when these departures are found on the coast or at sea, for violation of standards for possession and operation of departing vessels in national waters.

In Cuba, there is a system in effect that holds back on fines and other measures such as seizure and confiscation, for violations of administrative positions that don’t constitute a crime, so-called personal infractions. Up until now, the government has enacted more than 90 laws regarding misdemeanors.

There exist fourteen infractions regarding the possession and operation of vessels ready to go to sea, ranging in seriousness from serious to very serious, punishable by fines that start at 500 pesos and go up to 10,000 pesos and include confiscation.

A repeat violation in the commission of serious infractions, or infractions considered light or serious incurred at the same time, are punishable by a fine of three thousand to ten thousand pesos.

Roger has, aside from this infraction, 12 attempts at leaving the country. In December of 2006, he was detained while returning to the coast and interrogated by officials of State Security but was not fined. Julio has made five attempts and in four of them was not discovered by the authorities.

The Captain of the Port in his decision acknowledged that the rafters have the right to appeal his decision. The young men in this case sought legal assistance from the main office of the Cuban Legal Association, directed by Wilfredo Vallín, Esq. The lawyers of this independent organization drew up the wording of their petition.

“The declaration of December 16 by the Captain of the Port of Havana was issued after the deadline,” they maintained in their allegations. “This became an ineffective legal act for not having complied with the establishedformalities, in this case, the terms for the application of the declaration,” they argued.

The Captain of the Port refused to accept the petition. The lawyers of the Cuban Legal Association recommended that they not pay the fine. Still, the rules that govern the system of misdemeanors warn that in order to appeal a misdemeanor, one must first comply with and fulfill the terms of the penalty.

Fines are doubled upon lack of payment within thirty days following their imposition. After two months of non-payment, steps are taken for their payment by way of withdrawal from bank accounts, withholding of salary, pension, or any other form of income connected to the person being fined.

The rafters were not satisfied. Their most recent move was to request the services of a lawyer from the Legal Collective who would represent them in a legal case against the Captain of the Port. The Law of Civil Procedure currently spells out a procedure for appeals, within judicial channels, of the administrative decisions of State bodies that infringe upon established legal rights.

Julio Cesar Rifa Rivero and Roger Pupo Fariñas appeared at the main offices of the two legal collectives located in the Vedado and Arroyo Naranjo municipalities of Havana. They attempted to engage the services of four lawyers. All declined to represent them. The rafters assume that, perhaps, and only perhaps, the lawyers fear filing a motion against a branch of the Ministry of the Interior.*

*Cuba has two currencies. The Cuban peso (CUP), also known as “national money” is the currency wages are paid in; one CUP is worth about four cents U.S. The Cuba Convertible Peso (CUP) is pegged one-to-one to the dollar, although transaction fees and a “penalty” for exchanging U.S. dollars, makes it the rough equivalent of eighty to ninety cents U.S. A fine of 3,000 CUP is roughly the equivalent of six to eight months’ wages.

**The Ministry of the Interior (MININT ) is the government agency responsible for law enforcement in all of Cuba. This includes the ordinary duties of crime prevention, criminal investigation and prosecution, immigration control, passport issuance, and extends into oversight of dissidents, issuance or denial of exit permits, and by way of the General Directorate of Intelligence (DGI), intelligence gathering inside and outside the country including the acquisition of technologies from outside the country deemed necessary for government operations. Its operations are said to be modeled after the East German Stasi.