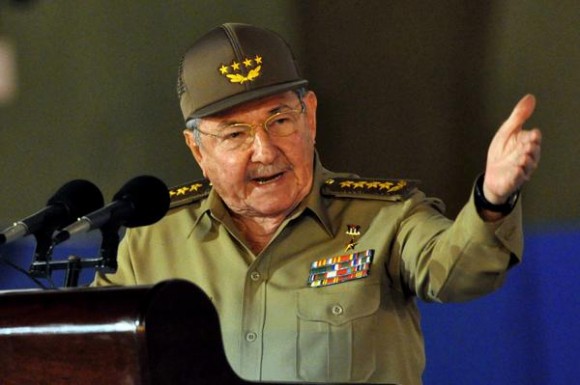 HAVANA, Cuba, January, http://www.cubanet.org – General Raul Castro’s speeches are becoming increasingly puzzling. One does not know if he is playing at being Chinese, or playing Russian Roulette.  Before, at least, he used to save us the fright, by letting us know when he was going to make a joke. Now not even that.

It’s not that he was being a ventriloquist, but his speech this past January first in Cespedes Park in Santiago de Cuba, more than his harangues of seven years ago, when he assumed power, seemed like those of Fidel Castro.

The general president assured us that the Revolution continues the same as when it triumphed 55 years ago, with no other commitment than to the people.

And one does not know how to understand this, because if that which some still call “the Revolution” broke its commitment some time ago to anyone, it was precisely to the people, abandoned to their luck in this save yourself if you can… if you are of the elite.

The commitment will be to Fidel Castro, and the historical leadership, that supra-institutional meritocracy, to the generals, to the orthodoxy, but to the people?

What is the commitment to the people by a government whose methods for updating the economic model, however much they may deny it, increasingly resemble the shock therapy of savage capitalism that came disguised as whatever, without capital or markets, and what is worse, without political freedoms nor the right to say boo?

What commitment is it by a government that, thinking only of its revenues, takes black market prices as the standard and declares illegal the survival mechanisms of an increasingly destitute people?

Of what value are the promises of a petty blackmail system that beats a retreat, that slowly and painfully dissolves in the hot air of the Guidelines of the Sixth Congress?

What does it have to do with the people, the sloppy capitalism of a State as mercantile as that of the absolute monarchies that we faced?

This speech by the general-president, in which he advances backwards, reminded me of the “call” to the Fourth Congress of the Communist Party that the army general made when he was Number Two, in March 1990. Then we understood little and badly. When finally the bloody congress was held, in October 1991, it was all exactly contrary to what was expected. And now we know the consequences.

Many years have passed, and he who was Number Two now is Number One. And it is not good for a ruler to miss so many opportunities.