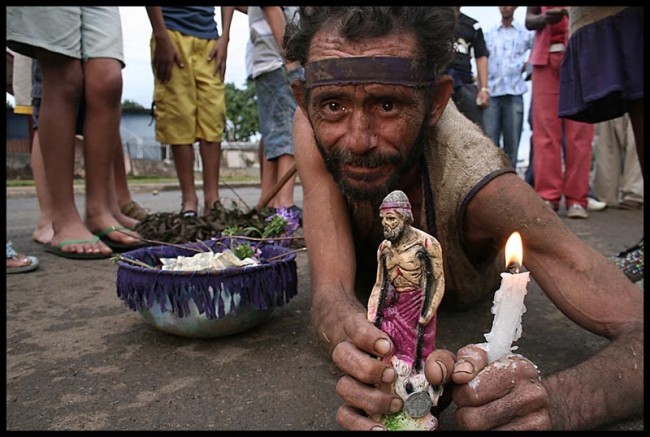 They are already arriving and being noticed. Afternoon comes to Santiago de las Vegas, a town south of Havana, with low houses and dusty streets. The followers of Saint Lazarus move along the road, dressed in clothes made of jute bags and dragging huge stones.

A person with a bunch of leaves goes before them, making a gesture as if cleaning the road. In a rough wooden cart, a good sized image of the saint of lepers. And a piggy bank for the curious to put small coins in.

They are the promise keepers. People who feel they owe their life and happiness to the miraculous saint. Anecdotes abound. A fat lady does an act on the road. She has dragged herself from a neighborhood of Marianao to El Rincón, where the church dedicated to the worship of Saint Lazarus is found.

The woman walked over 15 kilometers. According to her, she was condemned to die from cancer. She entrusted herself to “to the old Lazarus,” as he is known in Cuba, and the cancer disappeared.

From that moment, she promised that every December 16 she would crawl on her knees to offer her tribute to the saint. And today is the day. It is freezing.

During the week in that area, the thermometer fell to 44 degrees Fahrenheit. An unusual temperature in Cuba. If you add the high humidity, the wind chill is 33 degrees or less. But those who are fulfilling their promises are not stopped by cold or by distance. Ubaldo comes from Bayamo, a city over 500 miles from Havana.

On arriving, together with a few with relatives at the train station in the old part of town, he put together a great four-wheeled wagon. He placed a dazzling portrait of the saint inside. He put on a pair of short pants made out of a sack, and without a shirt, at the risk of catching pneumonia, began to drag himself towards el Rincón.

At times he stops and takes a big swig of cheap rum. People encourage him. One of his sons says the old man had suffered paralysis in his legs. The doctors assured him that he would never walk again. Ubaldo went to the parish of Our Lady of Charity in El Cobre, Santiago de Cuba. There, as he made his pleas, a pious man commended him to Saint Lazarus. “In a few months my father could run.”

Since then, every year he makes the pilgrimage from Bayamo to el Rincón. On the way to Saint Lazarus you always hear miracle stories. The atheists, who go out of curiosity or snobbishness, don’t believe all the legends heard in the journey. It is admirable to see so many people, many of them elderly, making a considerable physical effort to keep their promises.

Thousands of Cubans show up spontaneously for an appointment with St. Lazarus. They arrive in Santiago de Las Vegas, and along a narrow dark road about a mile long, they walk towards the temple. Along the way they sell soup, a broth made with vegetables and pig’s head. Also corn tamales, bread with pork and hot chocolate.

The government does not interfere. Nor does it encourage. The official media do not publicize this. Nor invite the followers that attend the parish. Although it attempts to pretend otherwise, the State does not agree with the Church. Of course, it does reinforce public transport and schedules a train at three o’clock in the morning to facilitate the return home.

It was not always like that. Romelio has been going to Rincón for thirty years. “At that time, we had to manage as best we could. The police were always on alert and watched us like dogs,” he says sitting on the tarmac after walking a long stretch on his knees.

As tradition dictates, the promise keepers rush to arrive before 12 pm in the sanctuary, to deposit their contributions and listen to the Mass. Outside, a concentration of pilgrims sing and warm themselves with mouthfuls of rum from a plastic bottle that is passed amongst them. Every time someone arrives crawling, they open a path, yell and cheer him on like a marathon runner reaching the finish line.

Sweating despite the cold, the promise keepers throw themselves on their backs almost breathless. No wonder. They have fulfilled their vow to Saint Lazarus.