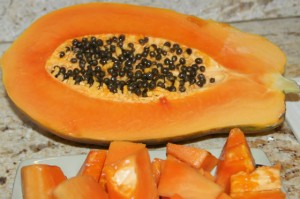 HAVANA, Cuba, November 2013, www.cubanet.org – The ban was issued by the Director of Farmers Markets just a month ago, because the vendors were making excessive use of chemicals (fordimed and carbide) to advance the ripening process in fruits, which in turn brought several complaints by customers who claimed that the uncontrolled use of these chemical altered the taste and texture of the fruits and was bad for one’s health.

Although the intention is to “protect the population,” it’s contradictory that this measure has only been applied to farmers markets, when the practice is a common one among most vendors operating in almost all points of sale, whether its one belonging to the Ministry of Agriculture, or a roving vendor.

The prohibition on the sale of bananas and papayas in the farmers markets in the capital, has only been strictly maintained in the market at 160th and 51st in La Lisa.

Julio Castillo Martínez, a vendor at one of the stands at the La Lisa market, and the source of this information, offered ripe bananas and papaya there, and said, “I was selling around 2,200 pounds of papaya a week and the same amount of bananas, and never had any customer complaints,” and he added, “the use of flordimed in small quantities diluted in water has been used for years by all the papaya producers at the time the fruit is picked and sold. In the case of bananas, I don’t use the chemical because they ripen quickly. This ban has affected my income.” 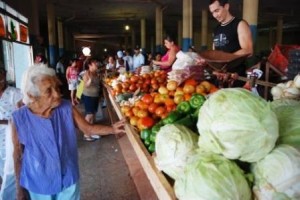 A truck driver who refused to identify himself, transports these fruits from the rural village of San Antonio in Mayabeque Province, to 114th Street in Marianao, where almost all the vendors of agricultural products get their supplies, said, “The fruits can’t be transported ripe because they get crushed and the measured or exact use of flordimed is not harmful, it facilitates the sale and has always been used.”

At the markets at 19th and B in Vedado and at Elgido in Old Havana, they’ve stopped selling papayas and bananas for more than 15 days, but they’ve started to offer them again in the last few days. One of the vendors at the market at 19th and D said, “Now we have to have papers that support the phytosanitary control of bananas and papayas in order to have them at our stands, although my products have always been high quality and no one has ever complained.”

The truth is that the absence of these products in the markets can’t be justified by the inefficiency of phytosanitary controls which the State itself should guarantee, or at least create conditions for others to guarantee it. And that must necessarily start from the same field the fruits come from. 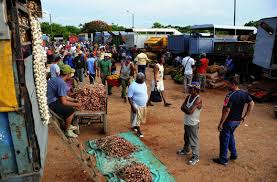 Beyond this, the problem lies in the lack of reviews of some irresponsible sellers who, eager to sell, sprayed the precious products with chemicals. This nebulous situation is annoying both the serious sellers, as is the case of Castillo, who have nothing to do with this, and who are now unable to sell their most popular products — papayas and bananas — as well as consumers who like these precious fruits and have to look for them in far off places.

For some, the measure taken by the director of the farmers markets, and so far maintained at the establishment at 160th and 51stin La Lisa, is not appropriate. A solution other than prohibition — so abundant on the island — should be demanded. Especially when we know that papayas and bananas are the only fruits Cubans can count on year-round. Don’t even talk about canistel, cherimoya, soursop, cashews, mandarins, star apples, and much less about good quality oranges.