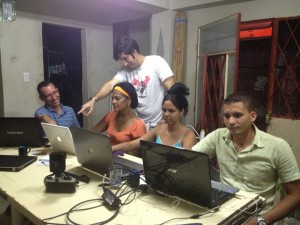 HAVANA, Cuba, November www.cubanet.org- Today no one doubts that much of the knowledge (still rare) that people in Cuba have about the people and projects of civil society, opposed to the political system, has been possible thanks to the dissemination of alternative materials in all formats, but especially in video. Thousands of discs, flash memories and other digital media have circulated from hand to hand in recent years, spontaneously creating the largest truly citizen network covering every corner of the island.

That’s why today we proudly present to Claudio, someone who has long been in the shadows, working tirelessly in the editing of the majority of the programs such as Estado de SATS, Citizens’ Reasons and many other initiatives.

Until yesterday Claudio had to be divided into little pieces, often using the wee hours of the morning to dedicate to us some time for each one us who lined up looking for his help to conceive, film and edit some material. This noble and intelligent young man deserves a gold medal for patiently enduring the demands of ao many friends who tried to be “Directors” of videos.

But he does not want to be irreplaceable, on the contrary, he is promoting a project that will give voice to more people and raise the quality of what is generated within the heart of a society that takes on, from the independent side, the tasks that State media should be developing to sustain us and instead deceive us.

His project is to provide digital editing workshops in several provinces. So far 11 students have passed the course in Havana and Santa Clara; in a few days four more will be ready.

“I’m doing nothing more than making a small contribution to democratize access to audiovisual media, technologically empowering citizens to develop their civic activism or sometimes, simply, so they can make a living without depending on the State, which always asks for something in return …  says the Prof.

In my experience, I can say that in learning to edit I have learned to observe, to decipher and therefore to understand the intentionality of what we Cubans are shown daily and what I see now on Telesur, the Venezuelan TV station that is now broadcast in Cuba.

In the case of Cuba, I can now affirm that the Revolution has not been well done, but it has been excellently edited.