Organizing my version of this two-day International Conference on the UN Covenants, I keep coming back to the final images of the movie Godfather II. Over in South Africa, the world mourns one of the best politicians I’ve ever known. Our General-President, invited to speak at the mournful event, exalts the forgiveness and reconciliation that define the greatness of Nelson Mandela. While in Cuba, an impressive police and vigilante operation conscientiously lends itself to the task of criminalizing differences, of fracturing our broken society a little more.

As I have decided to behave as a free person, and my visitors last week sought to prevent my attending, advanced my arrival at the venue of the Estado de SATS by twelve hours. It might seem exaggerated, but around midnight a perimeter was established with access controls and by the early morning and there were people who could not come. The few who managed to evade controls reported on the numbers of people who had been arrested, and through text messages and other means we learned of more actions and arrests.

On the morning of December 10, the street in front of Antonio Rodiles’ house, the site of Estado de SATS, was closed to traffic for about 25 yards, and elementary, junior high and high school students began to arrive for festive activity on Human Rights Day, a reactive move by the government since five years ago when the opposition gained the initiative for this celebration.

The government’s ‘celebration’ was as hard-edged as are all such unspontaneous events; the children delighted to be at a pachanga (party) with music ranging from Silvio to Marc Anthony, and not in school. When the moods are warm under the cloudless sky of this December that denies winter, reggaeton or Laritza Bacallao can get the kids moving.

I imagine they were summoned for a celebration, or at best an act of revolutionary reaffirmation, and I wonder how many parents were consulted about the use of their minor children, among those who assumed they were in their classrooms. 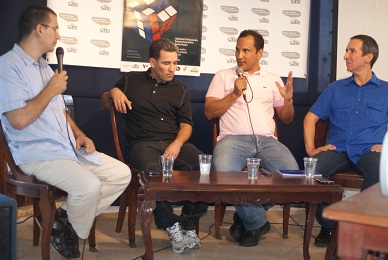 Among the blare of the loudspeakers and the concern as reports came in about more arrests, the panel on Journalism and New Technologies was held. All the theory expressed by the panel is what we are living in practice and we also experience the lacks: Communication via text messages with Twitter and with friends and family, contact with media, documenting everything via audiovisuals, doors within and on the street; the lack of internet connections — once again — that tool that will not free us but that allows us to express ourselves freely.

By noon on the 10th, it was clear they would not allow anyone else to arrive, always creative in managing things, but if I left, I would miss Boris Larramendi on the following day.

The night was very peaceful thanks to the absolute closure of the Avenue in front of the house. From dawn on the 11th it was clear they were going to repeat the spectacle in the street. For those who believe in energy, I can assure you that the atmosphere in the house was admirable: some unknown only the day before, heterogeneous from any point of view. Scaling mountains makes men brothers, a Cuban dissident said.

The fright came at 11:00 in the morning when Ailer María González — artistic director of Estado de SATS– left the house to walk among the small children who had been encouraged to paint on the street in front of the house. Camera in hand, Ailer walked among them without distracting or bothering them.

Immediately, to political police paparazzi surrounded here and Antonio Rodiles and Gladys, his mother, approached from one side and a group of plainclothes and uniformed police from the other. They exchanged words in the midst of the music and it seemed everything would be fine, but in front the sidewalk door to the house, Kizzy Macías, from the Omni-Zona Franco artistic project, was filming and a woman dressed in plainclothes came up quickly from behind and snatched the camera. 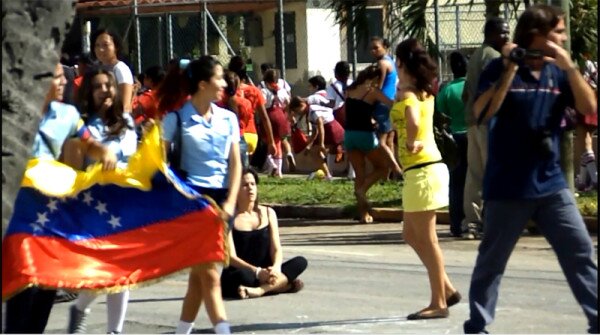 Like in the movies, everything seemed to slow down. The videos show it better and I hope they have been distributed on the web thanks to the solidarity of five surprised students from the Semester at Sea who were thinking about an art project and came face to face with the face of the wolf disguised as Little Red Riding Hood.

Ailer sat down in the street as a protest and Antonio’s phone rang on the table. I answered the calls from whomever, because of the arrests of Rodiles, Kizzy, the journalist Calixto Ramón Martínez and the computer whiz Walfrido López went viral on the social networks. And then I went to the kitchen to make lunch for more people than I’ve ever cooked for in my life, me, who is a very lousy homemaker. Being busy kept me calm. 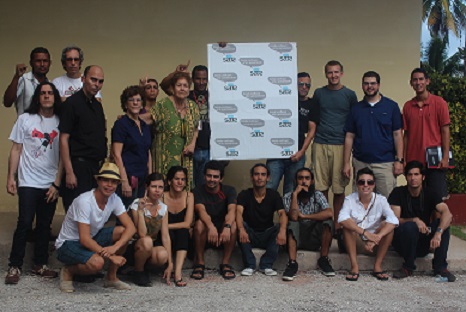 The poster exhibition and the concert began under major uncertainty. Arnaldo and his Talisman and Elito Reve with his orchestra threatened a thunderous night and they played with enormous amplifiers from the street. What can I tell you. I must have been in a ridiculous state singing along with Boris on all the songs and rapping with David D’Omni. At my age I don’t often feel myself to be young, but last night I sang for my son and for all who couldn’t be there.

If prayer has any value, it had it last night, because the prayer of many was that the concert would end without incident and a total downpour, what we call a “water stick,” canceled the activity planned for the street. In closing, our arrested friends showed up at 8:00 at night, and I have no idea what time it was when we took the photo that informally closed this eventful meeting. 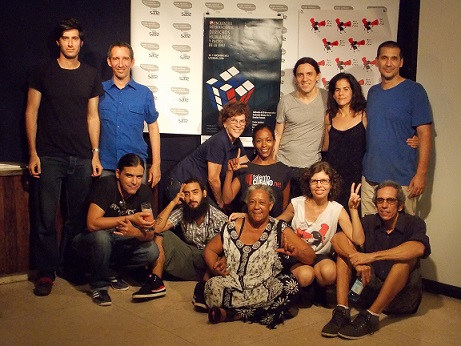 After the return of those arrested.

I was afraid. Afraid for Ailer advancing against the crowd in an image that will stay with me when I have forgotten many thing, afraid for my arrested friends who had been treated with the violence born of hatred, afraid for Gladys, the owner of the house, a woman of steel but not a healthy one, afraid because that was the preamble of more, and afraid for myself, not even having a phone at that moment to communicate with my family, who knew nothing of the situation.

Afraid because it’s one thing to be told about it and another thing to see it, and something very different entirely to experience it first hand, which was not what happened in my case. I had a glimpse of the dirty face of repression. But just that. This fear set off an enormous rush of adrenaline, which is certainly bad for my physical health; but for my mental health, there has been a before and an after.

*Translator’s note: Pachanga is a “festive, lively style [of Cuban music] and is marked by jocular, mischievous lyrics.” (From Wikipedia). The word also applies to the party itself.