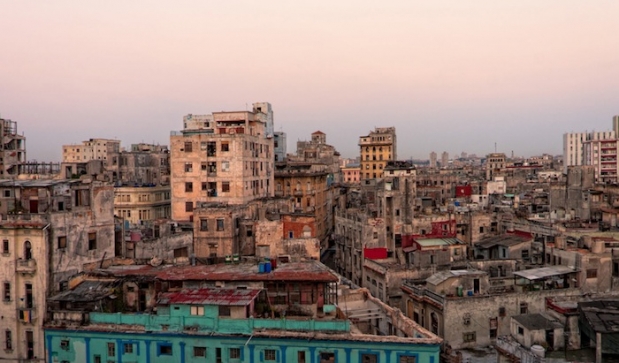 It was the evening of November 29, it was still raining in Havana and Rebollar Augustine, a retired 71-year-old resident of Vedado, stood crestfallen covering his face with his hands so no one would see him cry.

His mattress, appliances, clothing, furniture were all wet and to worsen his mood, his neighbor below started to shout insults when her roof also started to leak.

At an impasse in the downpour, Rebollar looked at the sky with the hope that the storm clouds would disappear, but the downpour increased and he furiously began stomping on the floor and yelling obscenities to let off steam.

Manuala, Olimpia, and Barbarita — neighbors of Rebollar — suffered under similar storms, and after the collapse of a connecting wall of their apartment, the police drove them to a shelter in the town of Boyeros, where they remain permanently evacuated.

Unfortunately, Fidel Vega and Pastora Góngora, residents of 619 Campanario Street in the municipality of Central Havana, died after being suddenly crushed when their dwelling collapsed.

There were countless victims and more than 2,000 evacuated due to the intense rains after the arrival of the fourth cold front of the current season.

In 72 hours the precipitation reached 300 millimeters (11.8 inches) in the northern municipalities of the capital, causing a catastrophic 227 collapses, 201 of which were partial and 26 of which total, according to government figures.

“Our ceilings are booby-trapped,” warned some of the capital’s residents in reference to the possibility that the downpours could cause their roofs to cave in. “Havana is like a sick old man,” noted others, meaning that the city recovers from one slump only to suffer from another.

In the prologue to the most recent edition of The City of Columns by Alejo Carpentier, Dr. Eusebio Leal portrays it as: “The city of the unfinished, the lame, the asymmetrical, the abandoned.”

In an study by María del Carmen Ramón entitled “Havana Is Expensive But It’s Worth It,” published in the online magazine Cuba Now, the architect Mario Coyula, the city’s director of architecture and urbanism, presented a more realistic and frightening image the capital’s future:

“Havana could end up being a Dante-esque vision, a great ring of piled-up trash or an empty crater where a city once was.”

The solution is the problem

Coyula points out that, if we look at the scale model of Havana, we will notice that the color yellow predominates. This color coding is used to designate areas of urbanization from the first sixty years of the 20th century.

We can therefore surmise that, since then, the socio-economic development of the capital, judging from housing construction, has been poor.

In hindsight, we can see that only Alamar, San Agustín and some areas developed by micro-brigades have been added. The population density increased, however, and with it has come overcrowding, especially in Central Havana, which has about 1,000 inhabitants per hectare*. If we take into account the area’s many low-rise buildings, this suggests that people are practically living on top of each other, like canned sardines.

Coyula notes that Havana still has the same infrastructure it had early in twentieth century, as exemplified by the case of the aqueduct. Now a hundred years old, much of it has collapsed. Its pipes were providing service to 300,000, though it was designed for twice that capacity.

Today the city is home to over two million people and requires heavy investment if it hopes to curtail the sewage spills running through its streets.

Coyula recalled that in a very interesting meeting with a development group in the capital many years ago a specialist from the Ministry of Construction said, “It will cost $3 billion to fix Havana.”

“But the cost is much greater,” claims Coyula. Havana is expensive but worth it and the only way to solve its repair problem is to find a way it can generate money for itself, as Eusebio Leal did with his Historic Center project.**

For 50 years the Ministry of Construction (MICONS) ignored building maintenance of the housing stock. Although the National Housing Institute (INV) created companies to deal with this, its efforts did not meet demand and instead it began shoring up housing in poor condition as a solution to the problem. This solution, however, proved inadequate, confirming that the approach to the problem was misdirected.

“Current home construction is only intended to replace those dwellings that have collapsed,” Coyula points out, “but government cannot be the only sector responsible for solving these problems. People cannot just wait passively for the paternalistic state to fix their house or build a new one.

“Similarly, the new law which legalizes the sale of houses could have a positive effect. It could encourage people to take care of their properties, not just their roofs, because it is an asset that at some point in time could be monetized.”

Coyula’s views are not shared by everyone. Fermín Álvarez, a 52-year-old economist, questions the feasibility of generating more than three billion dollars to fix the city’s problems given the failure of the current economic model and a monetary system made up of two weak currencies, factors which inhibit interest from foreign investors.

Similarly, Alvarez points out that the regime seems more preoccupied with squelching the self-employment sector, which represents a mere 2% of Cuba’s GDP according to official estimates, rather than encouraging individual initiative and development of the non-state sector, which could generate revenues for public services.

An ex-director from the former Ministry of the Materials and Construction Industry (MIMC), who requested anonymity, describes the law legalizing the sale of residences as a subterfuge by the regime to free itself of responsibility.

“For more than 50 years the government was the real owner of all homes, preventing the ’inhabitants who use them’ from selling to other individuals. They could only sell them to the state, which shamelessly took it upon itself determine their value,” he says.

“This situation caused many buildings to deteriorate, especially multi-family homes. After all, if the state was the owner, then it was also responsible for the upkeep.”

The shortages and high prices of construction material in Cuba are a consequence of a decision by the government to set aside most of these products for export and as aid to regional trading blocks while giving lower priority to the domestic market.

A 42 kg bag of cement costs 6.60 CUC (or dollars), the equivalent of half the average Cuban’s monthly salary of 15 CUC. How many people who depend on a salary can make such an investment and still be able to eat?

In addition, there is the purchase of other materials. But the most expensive is the skilled labor to undertake the repairs. “It would be delusional to believe that with the weak credit offered to the most vulnerable people reconstruction costs would be covered, after over 50 years of mistakes and stupid prohibitions by the government,” says the former director of MIMC .

Ninety percent of those affected by the weather event  that occurred on the 28th, 29th and 30th November, say they were surprised by the rains.

They note that the Institute of Meteorology offered a softer forecast, and nothing alerted the public about the possibility of heavy rains, with over 300 mm (12 inches) in the northern municipalities, which would resemble a “bombing” as those regions present the greatest construction problems in the capital. Nor were there any special announcements to keep the population informed.

Nor did the Civil Defense agencies — given their vertical structure — alert anyone nor offer information to support the victims. Hence, 95% of those consulted said there was indolence that caused unnecessary risks and loss of life.

Agustín Rebollar said that on this occasion the downpours never let up so that he could climb to the roofs and sweep our the drains, as he usually does in such cases. He said that to waterproof the roof he’d applied cement aggregates to plug the leaks, but he didn’t know whether or not he did it right.

“If at least they’d show something on educational television to teach us how to do it,” he said, “I myself would do it, despite my 71 years, because with the 270 Cuban pesos (11 CUC), they pay me as a pension, I can’t afford to pay a mason.”

Inside his home, Rebollar shows a beamed and tiled ceiling, arched and covered in slurry for the dampness, which hasn’t come down thanks to a shoring up with wood logs.

“The next time, if there is a next time,” resolves Rebollar, “I will be forced to do what the deceased Álvarez Guedes recommended: Give myself a kiss on the ass and say good-bye.”

** In 1982 the historic center of Havana was designated a UNESCO World Heritage Site and became eligible for funding for its preservation. Tourist taxes are also dedicated to this purpose.