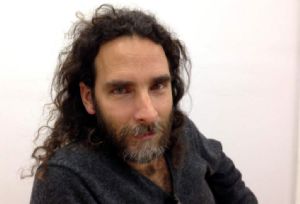 The restless, multifaceted Pardo Lazo graduated in biochemistry from the University of Havana, but left the field after 10 years. Since then he has been working as a photographer and writer.

Pardo, who published several books in Cuba, is currently one of the leading independent bloggers. He maintains two blogs (Post Revolution Mondays and Boring Home Utopics) and founded the magazine “Voices,” the first digital publication on the island. The magazine, devoted to literature and opinion, is printed in very small quantities, and is posted on-line as a PDF and distributed throughout the island via CD and flash drive.

Orlando Luis Pardo Lazo: I greatly respect the profession of journalist. When I say I want to have a column, I’m referring to having a space of freedom where I can exercise my opinion, with certain editorial standards, but without the hard or scientific data, statistical.

I wouldn’t work in favor of consensus: it would always be  a journalist of provocation, seeking to navigate upstream. It would be a more creative column, but grounded in reality, because I believe in the transformative power of writing. I like to exploit the social impact of writing from a position of provocation, always trying to pluralize thought.

ESC: How do you evaluate the impact of digital technology in the social and cultural life of Cuba?

OLPL: The Cuban government has just opened a hundred Internet access points, but with extreme vigilance, no guarantees. They are trying to portray an image of openings, but the truth is that a citizen can not go to a public company and contract for an internet account.

Therefore, there is no internet access in Cuba, although there are officials who do have this privilege; there are certain tourist hotels that offer the service in dollars and also a black market in the Internet. With all these limitations, the Cuban blogosphere still has a good number of blogs.

They began as a form of personal expression, perhaps as catharsis, but now I think there is a civic impact. Recently, many of us have been able to travel, to join the United Nations Correspondents Association, to appear in U.S. newspapers. We have talked and they have recognized us as interlocutors, active and thoughtful voices of Cuban civil society.

In addition to “Voices,” there is a photojournalism contest; spaces of debate like “Citizens’ Reasons” and “State of Sats” [Estado de Sats],which are filmed and posted on the web; projects of street artists, graffiti artists, independent audio visuals; the Rotilla Festival, dedicated to music, organized by the Matraka Group for ten years on a beach, until the Cuban government intervened and hijacked it; the Endless Poetry Festival, of the Group Omni Zona Franca, all month in December, house by house in eastern Havana. All these projects are outside the Ministry of Culture and will survive, because they don’t depend on the State.

ESC: At this level of writing, what are the most interesting and challenging blogs?

OLPL: I recommend reviewing three portals. HavanaTimes.org, where a score of people post, some of them from exile; Bloggerscuba.com, although it disappeared as a portal, you can find individual blogs: Paquito el de Cuba, by Francisco Rodriguez; Negra tenía que ser, by Sandra Alvarez; and La Polémica Digital, by Elaine Diaz.

And, my website, where the blogs are more controversial, Vocescubanas.com. There are the three visions. In the case of Vocescubanas, there collaborators who from anywhere in the world would opinion columns in newspapers or television programs, or be political.

ESC: Ten years ago there was the view that Cuba’s independent press, although very critical of the regime, was not known for quality journalism. Have you evolved? Where is the product of journalism on the island? Where is the questioning of the Cuban reality?

OLPL: There is no journalism. It could be erased at the stroke of a pen by the Faculty of Communication and its journalism courses, because in practice the product doesn’t exist, except outside of Cuba. We have occupied that space; some bring better tools, with skill in argument. Others do it almost without tool, but always reporting, from the news, what foreign news agencies do not want to cover.

That has a tremendous merit and a huge recognition. We have the experience of the Blogger Academy. In 2010 for almost half a year we met twice a week to talk about programs, journalistic and photographic techniques, issues of civil society and the law, anthropology. We have made an effort, because where we can’t go is to the University of Havana, as the government has set up a kind of “cultural apartheid,” where we have no room for those who disagree.

ESC: And the independent press, including bloggers and traditional journalists, is it in good condition today?

OLPL: It is in good condition, but in a committed way. Today there is an explosion because certain areas abroad welcome our reports. We lack a press that is edited and published with local efforts. We lack a newspaper — the dream of Yoani Sanchez — which can’t be legal, because the government does not support it; we lack also a radio station.

For now, some of us bloggers are covering this absence, but that could change any day with the absence of some; if some die and others are exiled, and then it would be the end. So it is a movement that needs to be supported, strengthened, empowered, from the outside. We need international solidarity.

ESC: In Cuba, to be a journalist or independent blogger involves risks. You yourself have been imprisoned. What has been your experience of fear?

OLPL: I was afraid when I had no voice; I had published several books of fiction, I was a member of the Union of Writers and Artists (UNEAC) and yet I was very afraid. As I began to speak, I lost the fear. Now I have no fear. Fear of what ? The only thing that can happen is death.

When Pope Benedict XVI visited Cuba in 2012, I was put in jail, it can be repeated at any time. The official journalists are very frightened perhaps, as are the ministers. Me, no; for me they will come once. Is that when you cross a line, and you are free. And self-censorship? Not at all. There are people who self-censor.

I worked the issue of marijuana, the Cuban Rastafarian community’s use of grass, and about the imprisonment of a Rastafarian priest, who is still in prison, Hector Riscart, the Ñaño, director of the musical group Herencia (Heritage). I investigated, did interviews. Someone advised me to stop. I did not, because I considered it a matter of civil law. Many people get panicky over the  issues of the subculture issues, pornography, racism. I ‘m willing to talk about everything, and I think I ‘m going to be very alone.