HAVANA, Cuba, September 2013 , www.cubanet.org.- Yudelsy García O’Connor was officially the first child born HIV-positive in the island. Today, and now a grown woman, she blames the Cuban government for the situation in which she lives. “They always showed me off to the world as an achievement of socialist health care,” she told this reporter.

According to the carrier of the virus, not having a legal address where she lives, they will not give her the special diet required for her health, because she has no ration card. She has tried in vain to persuade the [governmental] institutions to give her the adequate monitoring her condition warrants. “Stress is terrible for HIV patients, according to the doctors we quite often get depressed,” she said.

“On several occasions I have complained to all the state institutions in Mayabeque province, I have sent letters to the Council of State, directly to President Raul Castro and the Ministry of Public Health. The answer is always the same: We cannot help you,” said Garcia O`Connor.

Yudelsy was born in the province of Guantanamo in eastern Cuba. At age 5 she was transferred to the [HIV/AIDS] sanatorium in Santiago de las Vegas, in the municipality of Boyeros in the capital. Her father, Salvador García López, who was sent to war Angola where he contracted the dreaded disease died when his daughter was just seven years old. 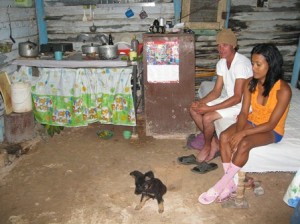 In 2002, former Unites States president James Carter visited the sanatorium, and met her in person. She was 15 years old. She later told the official Juventud Rebelde newspaper how grateful she was to the Cuban doctors and the Commander in Chief Fidel Castro.

“I decided to leave the sanatorium, at age 19, when my mother, Adoracelis O’Connor Figueredo, lost her battle with AIDS. I married another HIV patient. I wanted to start a normal life. Then the authorities abandoned me,” she added.

Today she is 27 and lives in Mayabeque province with her husband, in a house with wooden walls, damp with termites and a dirt floor, located in a rural area. “We eat what we can find in the day.”