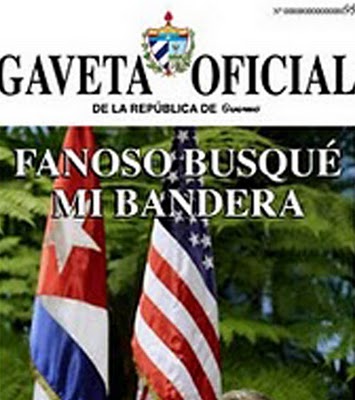 So we talk about everything with Jimmy Carter. Briefly, but everything. Except, of course, the boring state that is as stable as the price of peanuts in America (with respect there was only a small debate about whether it was or wasn’t indigenous to the region, but that was soon abandoned diplomatically in the absence of Encarta to settle the misunderstanding).

More than the use of the new technologies for freedom of expression, the former president was very interested in the new trends in reggaeton on the island, whose peaceful but subversive texts could constitute a popular source of the state of opinion contrary to the official discourse. Names of bands were mentioned and titles of discs, there was talk of “ethnic and generic imbalance,” and the lack of distribution of the reggaeton artists — in the face of state monopoly over the mass media — was lamented, just like for webpages considered alternatives to the status quo (something of a mea culpa was left floating in the air from this part of the meeting).

Three hundred and fifty-seven cordially presented proposals for transitions without foreign intervention — with their respective headings by stages — reached the ex-president. Carter accepted them all and promised to read them personally (in international politics he had learned not to trust “in the translators” he joked) and he would reach a consensus before the end of two democratic presidential terms in the White House.

A provincial writer read paragraphs of his upcoming epistolary novel, already censored by the Cuban Communist Party Secretariat of other province, violating this organ of maximum power’s own internal legislation, and he drew applause and tears for the autobiographical character of his tale in letters.

The star reporter of the BBC on the Island asked the ex-president if he knew, personally, the current leader of the United States of America, to which James Carter responded that, off the record, he remembered having attended his inauguration years earlier, but he would not dare to say so publicly for fear of committing perjury and being tried in Cuba (mutual smiles created a good-natured atmosphere of complicity between the speaker and his audience).

Carter elaborated on the advantages of direct sales of genetically modified vegetables and meat for human consumption in Cuba, and how with the passage of decades it would be seen that this practice was in fact harmless to native genome evolution and not mutate in any national Cuban race, which would remain a single nation and the homeland and in exile.

Carter fantasized “with his feet firmly planted on the ground” about the idea of a Cuban-American space program, where especially the intelligentsia of our country could “see things from an unusual perspective” without the “romanticism” typical of any “Revolution that is respected” as was “obviously” the case of Cuba.

Nor should one assume that a sharp silence is always sign of rudeness.

After the performance of “The Silence of the Peanuts,” the former president hummed a part of the Cuban national anthem in English: Never fear a death full of glory, since to die for our country is to live... and I ventured to return the gesture in Spanish with the American national anthem: O dí tú, puedes ver…

The expert Eduardo Fontes was missing, having declined to attend the conclave because it was held during working hours. Phones were returned and apologies made for the inability to twitter in real time, because this practice further disconcerted the former president. There were anonymous pats and hugs. He never asked for discretion. The sun was three pairs of timpani in the Plaza de Armas (we prefered to retreat on foot before the put us in the Yutong bus cage that State Security offered us no additional cost).