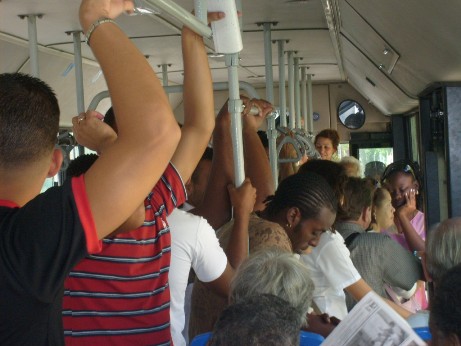 In addition to my undergraduate degree from the university, I have another I’ve found much more useful: A degree in Public Transport. This is in recognition of the deep knowledge of various forms of travel within the country, and, for those who don’t know Cuba, I assure you that it takes strength, knowledge, and physical and mental agility. Well, yesterday I tutored a friend not versed in this matter, in the intricacies of public transport in order to go to the International Artisan Fair (FIART) in the Pabexpo fairgrounds west of the city. Despite my recommendations, my friend carried an enormous portfolio which became an impediment from the moment we boarded the first bus.

One man behind her warned her, “Madam, take care of that portfolio because things aren’t good and the end of the year is approaching.” After that warning, the driver, with spontaneous kindness, added, “And this is nothing, in January a number of people are going to take out licenses to become self-employed thieves.” People in the front of the bus were laughing openly, though it was too crowded and a little too warm, despite the chill of the day. My friend, a former teacher, using the voice with which she controlled the classroom and stopped the driver so we could board, answered, “No way, the TRDs already have this license!” Knowing laughter and a voice answering, “They have to live!”

A woman between 35 and 40 feels obliged to say something, so she adds, “Yes, but here the learning is free and anyone who wants to can attend the University.” My friend the retired teacher is not light weight when it comes to a riposte, “Hey, Lady! Here,” (and notice the word she uses), “the university graduate then buys a job as a bartender or a taxi driver, the only place where a graduate can get these jobs without being an emigrant!” The woman is a bit annoyed, and left hanging by herself, because she finds no agreement for her position among the other passengers who move to the back.

The discontent and dissatisfaction were obvious in the tight space, though it is certainly not evident in the ballot boxes, but you can feel it if you just pay a little attention. Another passenger dropped a friendly hint, “There’s a lot of global warming and a lot of nuclear winter, but here, nothing.” Before we got off a boy with a long ponytail remarked wryly, “What for if HE say the war is coming?”