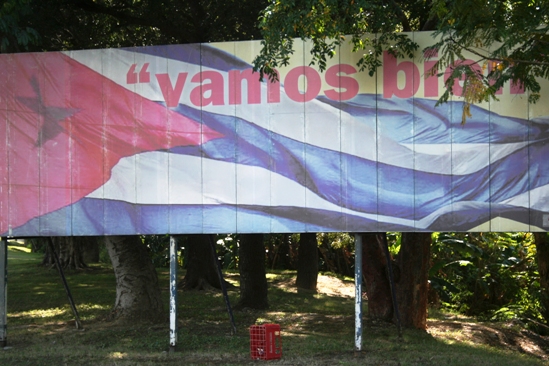 An amateur photographer friend of mine the other day expressed the disgust of his life. He was sitting near the La Lisa bridge, taking photos with a fixed background and moving objects in front. He saw a man in civilian clothes approaching him and when he got near he asked:

“Where are you from?”

“My friend,” he said, holding onto his camera and standing up, “I’m Cuban. Like you.” The question that followed was the one that upset him.

My friend was going to answer, but then he realized he was being interrogated by a civilian, so he replied,

“No, man, who do you work for that you are asking so many questions?”

Disconcerted, the guy showed my friend a fleeting fragment of a card where my friend spotted the letters DSE. The whole world here knows what these letters stand for: Department of State Security. In retaliation for my friend’s audacity in questioning his authority, he tried to intimidate him, taking down all the data on his ID card.

When he told me the story, more annoyed than concerned (also: my friend works in a state department), he wanted to know if this guy had the right to ask for his identification even though it is well known that taking photographs is not forbidden.

“In the first place, since you like photography you can take photos anywhere it is not expressly forbidden. Expressly in the form of a visible sign. And in the second place, unfortunately, in Cuba the authorities are authorized to request identification without any specific motive. But — and this is here the mix of ignorance and arrogance that many of these individuals have shows — if they are not in uniform they must correctly identify themselves, even handing their card to person concerned if that is required to establish their identity as an agent for the Ministry of the Interior.”

I explained that to him, despite the fact that I do not know of a single case of someone intercepted by the political police where this formality has been met. Many police officers, both in uniform and civilian dress, mistreat a citizenry ignorant of its rights. I recently saw, in Observatorio Critico, a photo of a young man beaten by three police officers, just for demanding respectful treatment. That’s how bad it is. When you demand from them, they apply violence, verbal — or in this latter painful case, physical — as a response.

For me, the part of the story I liked best was who-do-you-work-for. The question invites speculation about how they “orient” these law enforcement officers in these technological times.