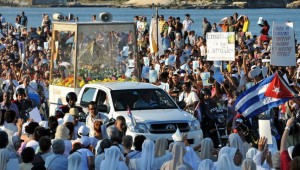 On the pilgrimage of the Virgin of Charity del Cobre, on September 8, a group of thugs were commandeered by Cuban State Security to attack opponents of the regime. I have to confess that I could not hide my surprise to see those criminals who, like mercenaries, respond to the orders of the military.

Among that group of people I spotted the Ladies in White with gladioli in their hands, ladies dressed in white, marching in silence. I approached them in solidarity, excited, without stopping to admit that it was silliness or innocence on my part, if it were within my reach, to protect them in some way.

An opponent pulled out his cell phone and tried to take some photos, and one of the delinquents who earlier and now, with license from State Security (G-2) acted as a bully on their behalf, tried violently to steal the phone. For a few seconds the force of the compact mass turned into a stampede. The international journalists tried to capture the images and the rogues, not the officials, tried to put their hands in front of the lenses to block them. Two thugs quickly took another opponent by the neck and pulled him into the candy store on Galeano street, where two other men were waiting inside where they beat him unconscious.

Then the supposed Ladies in White who were next to me started to shout, “Viva Fidel! Viva Raul! Viva la Revolucion!” I was so surprised by this farce that I fled, terrified of the ruling clique. I approached the young dissident whose cellphone they had tried to steal. And he told me the details.

I was so angry that I took out my phone to capture the faces of those who had undertaken the operation and one day, when freedom comes, it will at least be a reminder of the injustice and abuses there were. To my surprise, I didn’t know at what moment they had me surrounded. There were ten burly ruffians who had made a circle around me. I couldn’t approach them, nor they me. With the cellphone I filmed them, especially the Chief of Operations (he had a gold chain around his neck), who seeing my intention turned his face to avoid being captured on camera. There were two things that aroused my curiosity, and they showed up in the images: Among the miscreants there was one white, and they all had an aspect of low moral character, little education, and the air of the prison about them.

The pilgrimage changed into a journey of the absurd, of complete audacity. All I could do was ask myself two questions. How is it possible for a State employing such maneuvers to continue in Power? And the second: How is it possible that anyone can defend a system that commits these violations and abuses?

Last Monday, the 26th, at the Church of Las Mercedes, they conducted another but more hidden raid. Agents in the motorcade blocked auto access around the perimeters close to the church. A cordon of plainclothes knaves, with the same aspect of thugs, stationed on the corners, prevented the arrival of the opponents seizing their identity cards and loading them into Lada-made cars with yellow — private — plates, to avoid any association with the Government, and took them off to the interrogation rooms.

At the same time they prevented several Ladies in White from leaving their houses. At the doors of their homes, two unpresentable looking men warned them, every time they tried to leave, not to try it for their own good because something very bad would happen to them if they did. On the facing sidewalk several young women, who looked a sight, gesticulating and acting like a mob, told the two criminals, “Let them leave so we can come up there and give them something to show for it, when we’re done with them they won’t want to counterrevolutionaries any more!”

Despite everything, it was the reaction from the neighbors that caught my attention. They looked astonished about what the Castro brothers had come to, to save their useless system. And, despite their fear, they expressed themselves against the abuse without even lowering their voices, at the expense of those pressuring them.

Then other criminals came to replace them. And I followed them to see where they were going. Along the way they were boasting about the kicks and punches they were going to give to “these counterrevolutionaries,” if they finally left their houses.

that group of undesirables went down Cuban street until they reached the Police Station in San Ignacio. A police van was waiting to take them back to the shelters when the operation ended, and also waiting for a car with MINIT plates. When I went through the Station door I saw them inside having a snack, refortifying themselves to return to their repression.

A friend who lives nearby told me that the majority of the criminals in the operation were on parole from prison to help the Revolution. The classic blackmail. Most of the people they choose for the job are blacks because they intimidate them with what will happen if another system replaces the current one, and at the same time they are least likely to have family in Miami, so they can criticize them and persuade them to take such action.

But it is simpler and more straightforward than that: if they don’t comply with their agreements and follow orders when they are given, they return them to the prisons they took them out of to serve the rest of their sentences and, certainly, the cancel the reductions in their sentences for good behavior. My friend assured me that now a new force is coming made up of some of the 2,900 released prisoners that Raul Castro announced in his last speech.

Then I couldn’t help feeling sorry for these captive and at times enslaved beings, with a fate imposed on them, who also, like the opponents, are struggling to do better for themselves; only in the case of the dissidents despite the blows and arrests they suffer first hand, when they think of themselves they substitute their own bodies for the Island of Cuba.