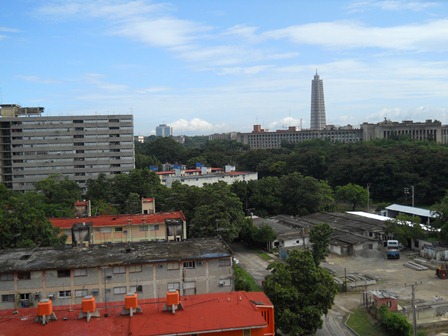 Now one of the photos I had put in my posts has been taken by State Security and put in a 17 minute documentary to try to accuse Señora Martha Beatriz Roque and twenty other Cubans of faking their hunger strike.

I wasn’t able to watch the documentary because my television broke some weeks ago. Following the appearance of the photo (where I appear in the company of women I greatly admire), I had won the opportunity to be heard by some people who didn’t know about the hunger strike.

In reality, this protest is also targeted to the arbitrariness of the system that doesn’t recognize our rights and tries to destroy us. So it was not covered by any Cuban news media but merited an entire production by the Revolutionary “artists,” who offered proof — once again! — of how over time they patrol, monitor, and keep our lives under surveillance.

So in the later edition and with the efficient work of a sound engineer, or maybe just a simple sound guy, part of the Cuban public has taken it as “proof” that the hunger strikers, and especially Martha Beatriz, were not in a state of complete starvation, having been given vegetables through the window on a date, according to what I was told, of September 18, which is when the strike ended after having received a response from Chaviano’s kidnappers.

I’ve worn myself out trying to explain to my neighbors that if someone wants to say it’s a hunger strike and later wants to eat their fill secretly, they can hide the food before beginning the process. I have noted the magic of editing and sound, with which you can do almost anything in audiovisual material, which is why it doesn’t prove anything.

Martha Beatriz did not move from her deathbed where I saw her, did not let anyone in, and always refused to receive medical care. One of the women companions of the strikers, who were there to help them, had to revive her on several occasions when she lost consciousness. There wasn’t any doctor from the clinic like they showed in the documentary.

Ultimately I decided to investigate, consulting several publication about when and how many times and based on what it was said, or F. Castro said from the podium, or from the position of an accusing witness (as in Huber Matos’s trial), that Cubans who opposed and do oppose the politics of the Castro regime that has become Cuban communism are not representing themselves. To put it another way: in my country, from the beginning of this great scam, they have accused the opposition of being mercenaries.

A mercenary is someone who is not involved in the cause for which he risks his life, and who receives payment from those who truly are interested. When my country received a huge amount of money and arms, including nuclear weapons as in the October Crisis, from the Soviet Empire with the condition that communism would be installed, who was the mercenary in that economic relationship?

But earlier, when the former Cuban president Prío Socarrás and the then president of Costa Rica in 1958 supported the armed insurrection of the rebels of the Sierra Maestra with money and arms, what did the opposition against Batista use this money for that was not taboo and in an case was it necessary and just to use it for something that was never the freedom of the Cuban people?

What happens in Cuba is that the State is the owner of all jobs, including the self-employed who take care not to annoy the State. And the State pays a salary of less than 20 CUC (< $20 US) to its employees. And if one of them behaves in a way that turns into a “deserter” from the hyper-controlled politics (which above all tries to keep Cubans with an idiotic beatific smile of socialism on their faces, waving flags and worshiping the government icons) it turns out that this uncomfortable atom in sick and dangerous society will be left, in the first place, without a job, if they decided ahead of time that they weren’t going to continue to receive — as a mercenary! — a salary from the abhorring State dictatorship.

Then, as the Cuban opposition is peaceful and doesn’t buy weapons, State Security and its campaign of manipulation whip up the people who receive half a pound of oil for the whole month against people who eventually could be consuming olive oil.

The political prisoner Martha Beatriz Roque, the only woman among the 75 arrested during the 2003 Black Spring, and Antunez, and the many people they slander on television are not compensated, let alone with $50 million dollars, because no one is asked if they are willing to suffer everything they narrate in their testimonies and in the end if they would be given this sum would choose such an ordeal for their life. A life so short, so fleeting, so exhausting, like that of the whole world. Their health, their youth, their life, their freedom, cannot be compensated with money. Our time is too short to sell it.

It takes courage and faith in God to believe that Cuba can still be free of the plague that darkens it.