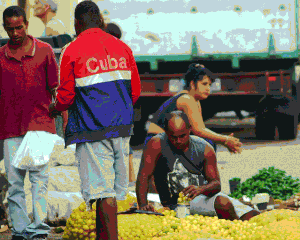 Ordinary people, exhausted from trying to put two hot meals on the table every day, haven’t heard the news they’ve been waiting for. Nor have the opposition, as they await the release of the thirteen political prisoners who have refused to leave Cuba, whose promised release date expired on November 8.

Where the news of the Cuban Communist Party’s Sixth Congress has been welcomed, has been among its militants. Despite the fact that the red card no longer has the charm of decades past, the membership of the only political party allowed on the island remains high at almost a million.

Founded in 1965, the PCC organized its first congress in 1975. Fidel Castro was elected first secretary, and Raul second in command. “In 2006, when Fidel was about to die, his brother took on the duties of the first secretary on an interim basis,” says Felix, 73, a retired militant.

Humberto, a 36-year-old truck driver, thinks that, “in practice, Fidel is still the one leading the party.” Humberto doesn’t understand why, “if in the last he has been making public appearances, it wasn’t announced by the comandante.”

Other people on the street have also noticed that Castro I missed an opportunity, to appear alongside his brother and Hugo Chavez, to make the call for an event of such supposed importance, once that hasn’t happened since 1997.

“It could be that lately, with the changes of time, he’s not feeling well, he’s an 84-year-old man,” says Rosalia, a 48-year-old housewife. According to Mario, her husband, the fact that Raul announced it, “is proof that there are no disagreements among the Castros.”

The question is whether, in the next six months, the militants will decide to keep Fidel Castro as first secretary, or to create a lifetime appointment for their “maximum leader.”

“I trust that his event will not only discuss the economy and define our socialist direction, but also be an opportunity to renew the party,” says the loyal old man, Felix.

As happened in 1991, when the Fourth Congress acted to allow religious believers to be party militants, it is hoped that the sixth will allow gays and lesbians to join. “That would be awesome,” says Ricardo, 42 and homosexual.

Wishes and predictions aside, what is certain is that the organization of the Sixth Communist Party Congress, as critical as it may be for the fate of the county, is not a topic that interests the people. Especially at this time of year.

With December just around the corner, Cubans are already thinking about how to “resolve” the Christmas Eve dinner and the 2011 New Year’s celebrations with family and friends. If their pockets stretch that far, they will buy Spanish nougat and a couple of toys for the kids.