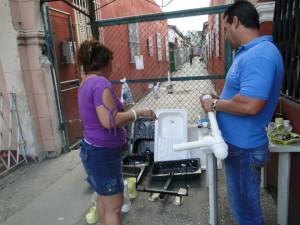 PUERTO PADRE, Cuba, November, cubanet.org — Officials in charge of overseeing the self-employment sector are updating their documentation of its licensees and subsequently warning them of possible violations.

Eddy Vega — a manufacturer and vendor of plumbing supplies, who buys and refurbishes pieces of tubing, accessories and old keys — was warned in no uncertain terms by his interviewer that it is strictly forbidden for anyone but the state to trade in metals. Eddy, a practicing Christian, told this reporter he is thinking of turning in his business license.

Self-employed workers are summoned to the old social workers’ headquarters, where they are interviewed one-by-one.

Similarly, food sellers, carpenters, masons, people who lease out their homes and anyone who is self-employed are called to appear. A carpenter said, “It’s very difficult to work this way. It’s already almost impossible to get wood. There are too many obstacles”

Small hotel operators were summoned by city officials in Viviendas a week ago. One official who requested anonymity said, “We have to exert control… Often lodging crosses the line into prostitution.” One operator, who asked not to be identified, confessed, “I’m going to turn in my license. In the future I will take in guests discreetly like before, without paying taxes. I think I will save up all the money that for months would have gone to paying taxes for paying the fine, if I am ever caught.”

These actions by the authorities serve as a policing tool, as outlined in the Cuban Penal Code: “Those not covered under any of the dangerous categories referred to in Article 73 (habitual drunkenness and alcoholism, addiction and antisocial behavior) with links to or relationships with persons potentially dangerous to society, to other people or to the social, economic and political order of the socialist state, and who may be prone to crime, shall be given warnings by the prevailing police authorities to prevent their engaging in socially dangerous or criminal activities.”

In spite of the stipulation in the Penal Code, police do not ask those being warned what they have to say in response to the warning. Instead they ask, “What are you involved in?”

Needless to say, self-employed workers here are not allowed to think about why they cannot acquire pieces of tubing and old keys for reconditioning and later resale.