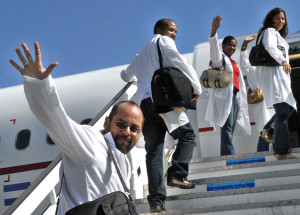 A friend of mine, whom I will refer to as “Greta”, is a doctor and holds a responsible position at a clinic in an “upscale” neighborhood in Havana. Although not well versed in political issues and ideologies in general, or in Marxism in particular, for many years she accepted membership in the PCC [Cuban Communist Party] because being a member facilitated access to certain benefits, such as getting her daughter into a child care facility quicker, a semi-boarding school for her older child, and a little faster advancement in her career, beyond what would be expected of her average talents.

Greta is not, therefore, a communist revolutionary or even a system sympathizer, nor is she of the opposition, but an opportunist, sheltered into the regular rhythm of a system that does not bother you much as long as you pretend obedience and follow the guidelines.

Or at least that’s the way it was until very recently, when a “professional division” of the municipal CCP went to a meeting of militants at her clinic and expressly gave the directive for an ideological mission: because of the increasing attrition of doctors and other health professionals from the so-called internationalist missions abroad, all members of the “party nucleus” of the clinic were required to visit relatives of the deserters to inform them that such defectors should not consider themselves final émigrés, but that they had a period of two years to evaluate their return to Cuba to continue to quietly practice their profession and to enjoy “all rights”, just like the rest of Cubans on the Island. (Yikes!)

Greta dropped her nail file (she uses the nucleus meetings to update her manicure or to check her cell phone). She could not believe her ears. Now, in addition to her daily walks visiting patients, their families and doctors’ offices, responsibilities of her job, which she carries out well, she would have the additional duties of visiting the “deserters” homes because the political authorities generously “pardoned” them. She, who had managed to not participate in repudiation rallies or in sanctioning meetings, would have to “get at the conscience” of the relatives of the doctors and technicians who have left so they would, in turn, convince them of the possibilities of “returning to the motherland”.

Barely a week before, Greta had made her regular visit to the parents of a good friend, a doctor like her, one of those “deserters” who resides in the US as of a year ago and works as an ambulance paramedic. She picked up a few pictures that he had sent and had some delicious coffee sent by the ex-traitor to his parents. Her friend, or anyone who she knows of, would never dream of coming back to reclaim rights in Cuba… not even those who stopped practicing their profession and now work in other jobs in the health care field.

The militants looked at each other, perplexed. Just a few months ago, the clinic’s management had called a morning meeting to condemn the betrayal of a new defector (another one) who had betrayed his people and the revolution and didn’t even deserve a drink of water… What was this crusade now, pardoning those who had never asked to be pardoned and who, it is clear, would never make use of it? It was the height of absurdity.

And that’s the point where Greta’s tolerance collapsed. She rose from her chair and snapped at the “cadre of leaders” that that was their job to do, and not that of the doctors at the clinic. That’s why they had been assigned a salary, an air-conditioned office and a car with a tank full of gas, while she and the rest of the staff of doctors had to wear out their shoes walking the streets in the heat of the sun to accomplish their jobs. That said, Greta picked up her purse from her seat and left the meeting, leaving behind a stunned silence, followed by a murmur of approval, and barely five minutes after that, the meeting came to an end.

Greta is now waiting for the next meeting, at which they will certainly take away her party card and a great burden off her shoulders. I asked if she was afraid of losing her job and she answered, in her usual smiling and mocking way “with the great number of physicians abroad and all the ones that will continue to stay abroad, they will probably ask me to please not leave… In short, it’s likely that, along with my party card, they will take away my administrative duties, so I will fare better than before: more time to dedicate to my patients, to my family and to myself.  I may even start a private practice, like some of my other doctor friends. I will be one more of so many deserters who will be staying.”

Going forward, Greta will have to be careful. This type of desertion of a doctor towards the private sector inside Cuba will certainly not be granted the authorities’ pardon.