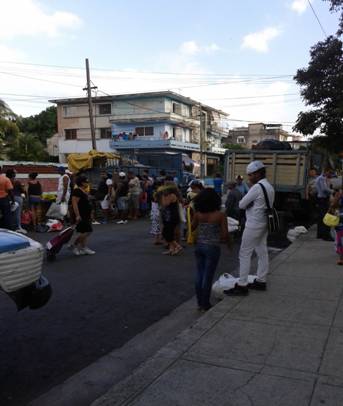 December has for decades always been a month of circuses, but, in the economically failed regimens, the circus is always present: “If there’s no bread, give them circuses*,” says an old refrain.

The principal actors at this year-end have been the unstocked farmers markets which, upon closing their doors, have given way to improvised fairs where, in place of food, police have abounded.

Yesterday on Monday, when I went to take a turn using the Internet, I took the P3 Bus, at the 26th and 41st stop, the closest to my house. The bus had barely made it past the next two stops when all of us passengers who were traveling to Playa** had to get off at 26th and 25th. The route was detoured due to an agricultural fair that was taking place on 24th and 17th, next to the farmers market at that location — which, by the way, was empty and closed off.

Three trucks filled with sweet potatoes, plantains and tomatoes made up the fabulous offerings at the fair. A line of naive customers waited their turn among dirty puddles, squalid stray dogs, and more law enforcement officials.

A friend and I, due to the absurd diversion of the only route, were returning in the afternoon, walking from the recently-restored iron bridge, searching for the P3 stop so that we could ride the bus back to our neighborhood. Imagine our surprise when we discovered that the morning’s detour was still in effect. We were forced to continue on foot until we reached our respective homes in Nuevo Vedado.***

Upon nearing the trucks that bore the agricultural products on offer, I overheard the following comment: “Such a fuss over a tomato that’s more expensive than at the farmer’s market!”

Translator’s Notes:
*Literally, in this post, “A lack of bread, circus.”
**Playa is a municipality in the city of Havana.
***Nuevo Vedado is a neighborhood in the Plaza de la Revolucion municipality of Havana.