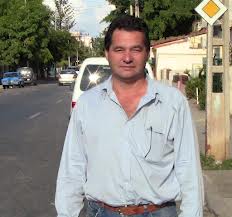 Cuba stopped being the subject of good news in the world press many decades ago. Day by day, the violations of human rights, the repression and violence of the State, the secretism around the health of the dictators — the retired Fidel Castro and the “active” Hugo Chávez — the political persecutions, arbitrary detentions, religious persecution, the political prisoners and the concentration camps where they keep them in squalor, the epidemics of cholera and dengue, the miserable conditions of life and health are, among other things, many of the misfortunes that those of us who are trapped on the island suffer, the “leit motif” in the newspapers and foreign media. Of course there are always some who are full of flattery for the cruel regime, because business is business. And the truth doesn’t matter to them either, because they live on the outside.

The dictator should have taken note by now that he is his own worst enemy. No one in his right mind and in possession of all his faculties can think — or try to make himself believe — that the problem with Cuba is the embargo and the “imperialism” of the enemy. And it should be assumed that being a dictator makes for bad press everywhere in the world.

He can try to lie and silence the Cubans, but he can’t do it to the rest of the world.

And while I wait for the response to the call to shame about the judicial ruling on a case invented with the purpose of sending me to a concentration camp for five years, alleging that I write with a “certain” inclination, and I design my letters with a “very suspicious size,” in France they praise my literary work; they publish it and they promote it.

IN CUBA, THE WRITER AND BLOGGER ANGEL SANTIESTEBAN IS CONDEMNED TO FIVE YEARS IN PRISON

The harassment of Cuban dissidents by repetitive political interrogations and short-term arrests has increased since Fidel Castro has been replaced by Raul Castro: The writer and blogger Angel Santiesteban Prats, 46, has just been condemned by a court in Havana to five years in prison, for aggravated assault.

Ángel Santiesteban Prats is a recognized author, awarded prizes by Cuban institutions, like the prestigiousCasa de las Américas, and foreign ones, like Radio France Internationale.

The writer has created a blog critical of the Cuban government, “The Children Nobody Wanted.”

For the last three years he has been the object of diverse threats and assaults by State security agents, the last one taking place on November 8, in front of a police station in Havana, when he requested information about an independent lawyer detained the night before.

On this occasion he was brutally interrogated, then released after his relatives posted a photo of his bloody shirt on the Internet.

Santiesteban Prats was judged by the Diez de Octubre neighborhood court, in Havana, on October 29, but the sentence was not known until this week-end, when it reverberated throughout the Cuban blogosphere. Unable to charge him for his dissident activity, the authorities invoked common law charges, most of which were dismissed by the court. The writer expected to be absolved, before his brutal interrogation of November 8. He announced his intention to appeal the ruling.

Angel Santiesteban Prats (born in Havana, 1966), had been awarded the Juan Rulfo Prize by Radio France Internationale in 1989, the prize given by the National Union of Writers and Artists in Cuba (UNEAC) in 1995 (for his work “Dream of a Summer Day,” about the dramatic experiences of Cubans in the war in Angola), the Alejo Carpentier Prize from the Cuban Institute of the Book in 2001, and the Casa de las Americas Prize in 2006 for his collection of short stores, “Happy are Those who Mourn.”

L’atinoir is publishing the French translation of the stories of “Laura in Havana” (134 pages, 14 euros), available in bookstores beginning December 17.