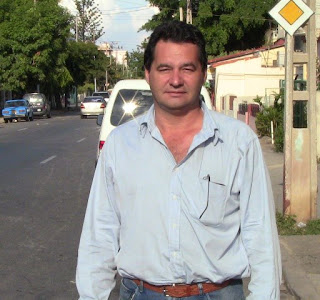 The writer Angel Santiesteban must turn himself in this Thursday to serve a five-year jail sentence.

This morning, Thursday, February 28, 2013, a 46-year-old writer, considered one of the pillars of narrative of his generation, awarded the highest literary prizes of his country, will go to jail.

Angel Santiesteban Prats must turn himself in at 9 am at the Provincial Court of Havana, where he was summoned to begin serving a five-year sentence, handed down last October after a tortuous legal process. The case lasted three years and eventually Santiesteban was sentenced on charges of “housebreaking and injury”against his former wife.

The process was subject to irregularities and from the beginning was denounced by the writer as part of a maneuver to silence his dissenting positions. His case has gained international attention, while in Cuba dissident movement and his colleagues who appreciate him have shown their total solidarity.

But the government has ignored their demands and after the conclusion, on Sunday, of the XXII International Book Fair of Havana — with manifest calculation — they hastened his imprisonment. On Monday, Santiesteban received the citation from the hands of a neighbor, where the authorities had left it two days prior. The idiosyncrasies of the tropical Police remain unchanged.

Last night the writer said goodbye to his friends and supporters during a meeting at the Estado de Sats project, directed by Antonio Rodiles. The reading was entitled “Zone of Silence” and Santiesteban shared his best stories with the supported public gathered there.

The man who will go to jail is one of the most productive Cuban authors of the last two decades with the literary scene on the island. In 1995 he was awarded the Writers Union National Prize for his book of stories, “Dream of a Summer’s Day.” In 2001 he won the Alejo Carpentier Prize for Fiction for “The Children Nobody Wanted.” Five years later his work was crowned with the Casa de las Americas Prize “Blessed AreThose Who Mourn.”

As Julio Cortázar wrote to Carpentier in a letter of 1971, following the Padilla arrest, “every imprisonment of a writer is a sad and disturbing event.” To make it even more notoriously disastrous, Santiesteban will go to jail on the fifth anniversary of the Raul Castro’s government signing the United Nations Covenants on human rights, civil, political, economic, social and cultural Rights, in February 2008.

I talked by phone with Santiesteban on the eve of his coming captivity. I leave you with his words, his steadfastness and faith.

I learned on Monday that they had left the summons at a neighbor’s house, on the weekend, very odd especially since there were always people in my house. This Thursday at 9 AM I am supposed to the at the Havana Provincial Court, next to the Capitol. From there they will take me to the prison they decide. They’re so clumsy they didn’t even realize that this is the anniversary of the United Nations Covenants signing by Cuba in 2008.

I think the decision to imprison me is final. I know of a writer who was very close to my son — he was a teacher but I prefer not to say his name — and he asked him on several occasions if I hadn’t gotten the summons, and it seemed strange that he was so sure they were going to send it to me. Then I thought for a moment they wouldn’t summon me, but this writer asked insistently: “Did your dad already get the summons?” That is, they were sure they would summon me. I don’t know how far they can take the came, but it doesn’t seem to me now to be a threat or pressure.

The silence of Miguel Barnet

Miguel Barnet, who heads the Union of Writers and Artists of Cuba (UNEAC), as of Sunday is also one of 31 members of the State Council. I have wondered if he could help from his position to re-evaluate my case and I would think he could, but he has had time and as of today hasn’t done anything.

He sent the judgment to the legal representative of the UNEAC and she explained clear that they had nothing on me. He knows it’s an injustice, I do not know how far he’s willing to take his bravery and the chance that he might act. There is a lot of pressure and he knows it. In any event, they dump the bucket of excrement over him, Abel Prieto and UNEAC. Me, no, I will go as a badge of honor, it truly is an honor to be imprisoned by the dictatorship. For them it’s an embarrassment that knowing there isn’t a single proof against me and having demonstrated at the trial that I’m innocent, they put me behind bars.

They have had to lie to convict me. They haven’t had the decency to admit that they were wrong. They don’t want anyone to defend me, I’m just asking for a fair trial. That’s enough for me. And where there are international observers. They can not keep playing that way with humans.

I’ll be on time in court Thursday. It will be a hot morning, because the opposition wants to make a full appearance there. It will be a fraternal farewell to somehow tell me I’m not alone.

I’m in good spirits, I have with me here today to Jose Daniel Ferrer, who is a professor in all this Cuban suffering. He has a very brave manner. We talked a lot and he has passed on to me all that courage. I’ll try to do it with as much dignity as possible.

I am calm. I will move to another phase of struggle; I will be directly in their hands, but I know I’m going to cause more problems than they imagine. Everyone asks the same question: why imprison a writer now, at a time when the government tries to present a picture of changes and openings to the world? My only hope is that at the last minute a Superman will appear and say, No, this must be stopped. But I don’t think about that, because I would waste the time I should devote to other important things.

It’s not just alarming to put in prison a writer who has won the highest literary prizes and awards given this government itself, but the process is crude, too crude, too badly done. This can not be legally sustained. If I did not have ways to prove I’m innocent, then they would have to shut my mouth. But they don’t have proof, not a single hair from my head.

Just one expert Lieutenant Colonel says he can tell by the size and tilt of the letters written on paper that I’m guilty. Another psychiatrist who says that because my son was born with a syndrome, I’m guilty of this syndrome. They even confused in the section for which they had to sentence me according to tax charges. Even choosing a section that was far from what I had done and that included fewer years in prison. That’s enough anywhere in the world for a mistrial, except in Cuba.

In the video that we managed to take of the witness Alexis Quintana Kindelan, that’s now circulating in the internet, he himself confesses that my ex-wife told him what he needed to say, knowing it was false, and this witness comes to recognize that she has an intimate relationship with the policeman who was then used to accuse me. And that was the prosecution’s witness, not mine! That was the person they would use to say that I was entering the house! Then when that witness became advantageous to me, he was removed from the process. It was the only witness they had.

It was so crude, what they’ve done, it’s unexplainable. It’s alleged I entered my ex-wife’s house, beat her, raped her, robbed her, tried to kill her, a whole chain of events, things that were added over a month. So how, then, are they going to drop these major crimes and leave the paltry ones, if it’s all a chain of events? If the sequence is continuous, how could one crime be committed and not the others.

It’s disrespectful, because my son says I wasn’t in the house, and there are witnesses that I was somewhere else. The authorities said there was a contradiction between the child and my witnesses, but really there is no contradiction, just the opposite. This has reinforced this farce, which is legally untenable.

If what they want is that I suffer a bit, because I am disposed to suffer with great pride, because I will not be daunted. What I want to make clear to the world is that they have not demonstrated any guilt on my part. It’s hard to believe that a person who had never had a problem, one month after opening a blog — The Children Nobody Wanted — with critiques of the human rights situation, is turned into a bloody criminal, into the worst criminal in the country.

The Cuban intellectuals hide, because accepting that there’s a problem with me, means they have to take a position. If there was an injustice, they have to say so. But while they have this hint of a doubt and caution not to say anything, invoking that both sides have to be heard, there’s nothing to be expected from them. Among those intellectuals there are those who were trampled and humiliated in an era not so long ago for being homosexuals, or for creating a literature that didn’t satisfy the sweetened image of the Revolution that the regime wanted to show, and they were incapable of raising the voice to defend themselves and to defend their comrades of their generation from the injustice committed.

From the darkest point

This is like waiting for the unthinkable. We are in a lawless State and from the beginning we knew that the arbitrariness could affect me, but I thought it might not go so far. All that remains is international pressure and they know they can not control an opponent’s life because he thinks differently. I am a Cuban intellectual who thinks for himself and needs to express this thinking, that usually Cuban intellectuals remain silent out of fear. I’ve managed to lose that fear.

I’m not going to silence what I think now either. From my new circumstances I’m going to continue fighting to express my opinion. From the darkest point where they can take me, I’m going to rebel and defend the freedom and democracy in my country.